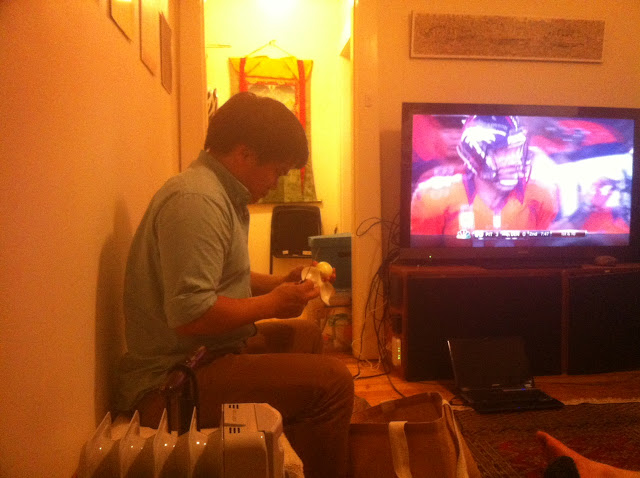 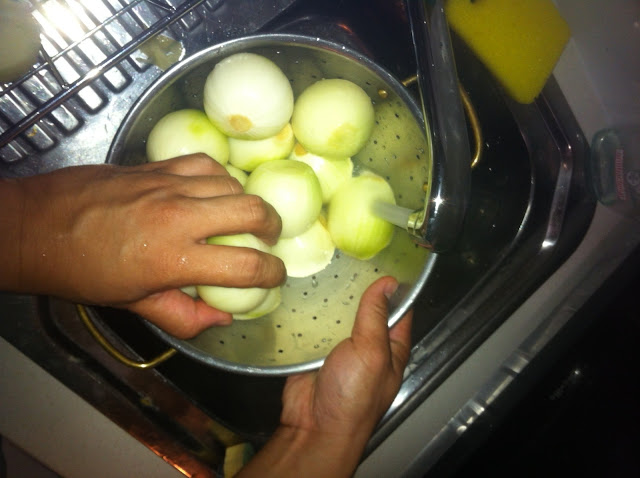 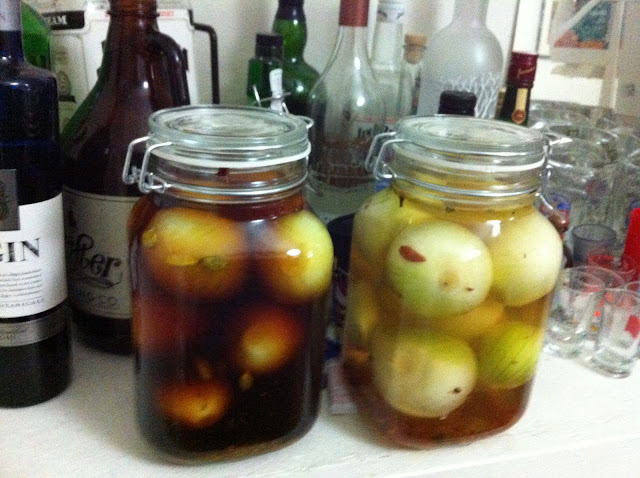 When I started this blog, I never thought the pickling would get to a stage where I would be watching the footy and having some beers with mates, while peeling onions...
It was pretty busy week at work and I hadn’t been able to find any time to devote to pickling.  Then one morning I got a call from a mate.  A few of my mates are lovers of all things American (aka Yankophiles), and in line with this USA-obsession, my mate invited me to his place for some beers, some food (a delicious brisket) and American Football.   The Pittsburgh Steelers and the Denver Broncos were playing.  The only issue was that I had planned to start pickling onions that night.  But I figured there was no reason I couldn’t do both, so I found myself walking through Darlinghurst carrying a sack of onions...
When trying to decide what to pickle, the classic pickles and preserves always appeal to me. The chillies were a good way to start off, as they were quite simple and not very involved, but I wanted to make something more complex and that took more time – slower food.
I decided on pickled onions, which are a staple for bars and pubs all over the world.  I also thought that onions would  fit nicely into some large jars I had purchased the week before.  The onions I ended up using were a bit bigger than the size you see in the jars of pickled onions at the supermarket, but hopefully they still do the trick.
As there is quite a lot of water in onions, which increase the chances of spoilage, all pickled onion recipes I came across in my research required a period of brining, usually for a day.  The salt in the brine extracts the moisture from the onions.  This enhances preservation, keeps the onions firm and prevents mould.
In terms of the vinegar, I decided to make two batches – one batch using normal white vinegar, and another using malt vinegar.  It’ll be interesting to see if it makes a difference.  I also put more curry based spices in the malt vinegar version.
Ingredients
-          2 kilos of small pickling onions.
-          1 cup of rock or Maldon salt.
Regular Vinegar
-          3 cups of white vinegar.
-          ¾ cup of sugar.
-          1 tablespoon of peppercorns.
-          2 tablespoons of pickling spice.
-          4 bay leaves.
Curried Malt Vinegar
-          3 cups of malt vinegar.
-          ¾ cup of sugar.
-          6 cardamom pots, cracked open.
-          1 tablespoon of fennel seeds.
-          1 cinnamon stick.
-          2 heaped tablespoons of curry powder.
-          1 teaspoon of turmeric.
Method:
1.        First you need to make your brine.  Simply add the salt to about 5 cups of water (enough to cover the onions in the container you’re storing them in for the brining).  Then simmer until the salt is dissolved.  Allow to cool.  It’s important that you let the brine cool before you cover the onions in it or the onions will go a bit wrinkly on the outside.
2.       Once the brine has reached room temperature, put your onions into a large bowl or container, cover them in the brine until they are submerged, then weigh them down with a plate so they stay submerged.  Let the onions brine for at least 24 hours.  (I left mine for two days, as I couldn’t find time to finish the process sooner, so hopefully they turn out well...)
3.       After 24 hours you can prepare the vinegars.  Simply put the spices, sugar and vinegar into a pan and heat until just below boiling point.  Make sure the sugar and spices dissolve.  Once dissolved, you can let the vinegar cool and infuse.  The longer you leave it to infuse the better.
4.       Remove your onions from the brining solution and drain and rinse them thoroughly.  Pat the onions dry with paper towel.
5.       Put the onions into sterilised jars and then pour the cooled vinegar into the jars until the onions are completely covered.
6.       Seal the jars and store them in a dark, cool and dry place.  Then you can start to play the waiting game....for two months....
Posted by Jarhead at 14:01