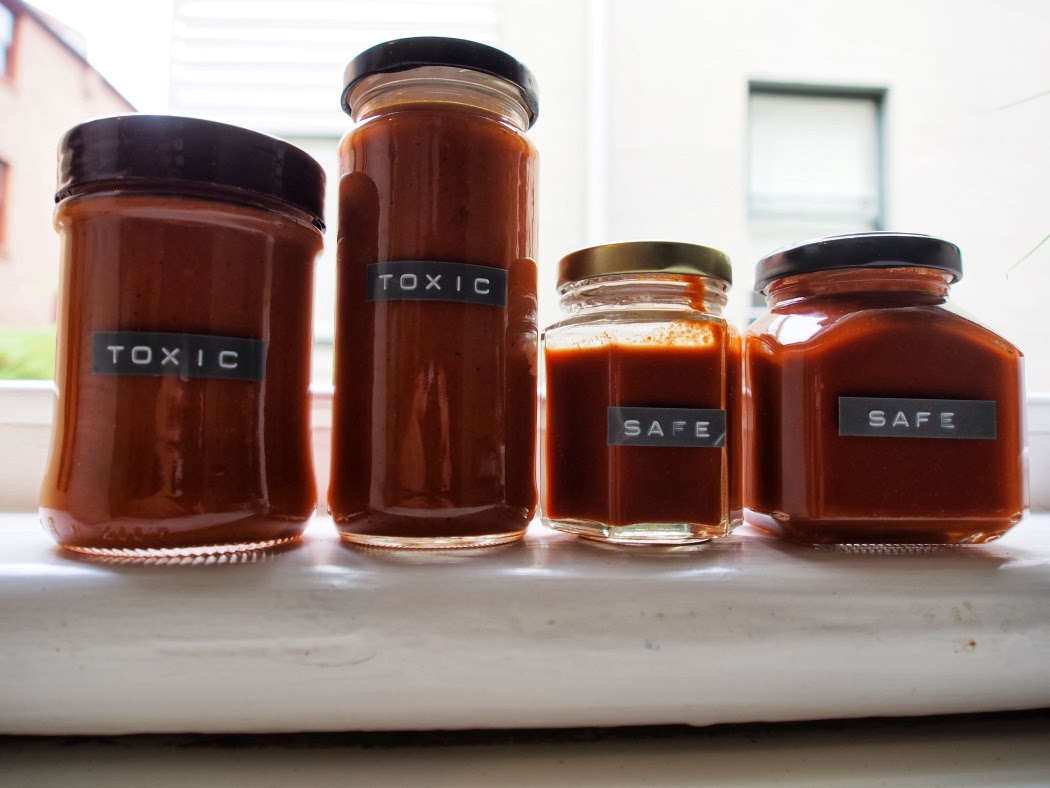 In November last year, the Sriracha hot sauce factory in Irwindale, California was shut down.  I was devastated.  What would I have on top of my homemade tacos?!  Or drizzed onto Korean bulgogi buns?!  And what about the delicate balance of peanut butter, Sriracha and hoisin sauce required for the perfect sauce for Vietnamese rice paper rolls?!?!  Life as I knew it was over.

After waking up on the ground, having fainted, I was struck with an idea.... a BRILLIANT idea!  I could make my own Sriracha sauce! 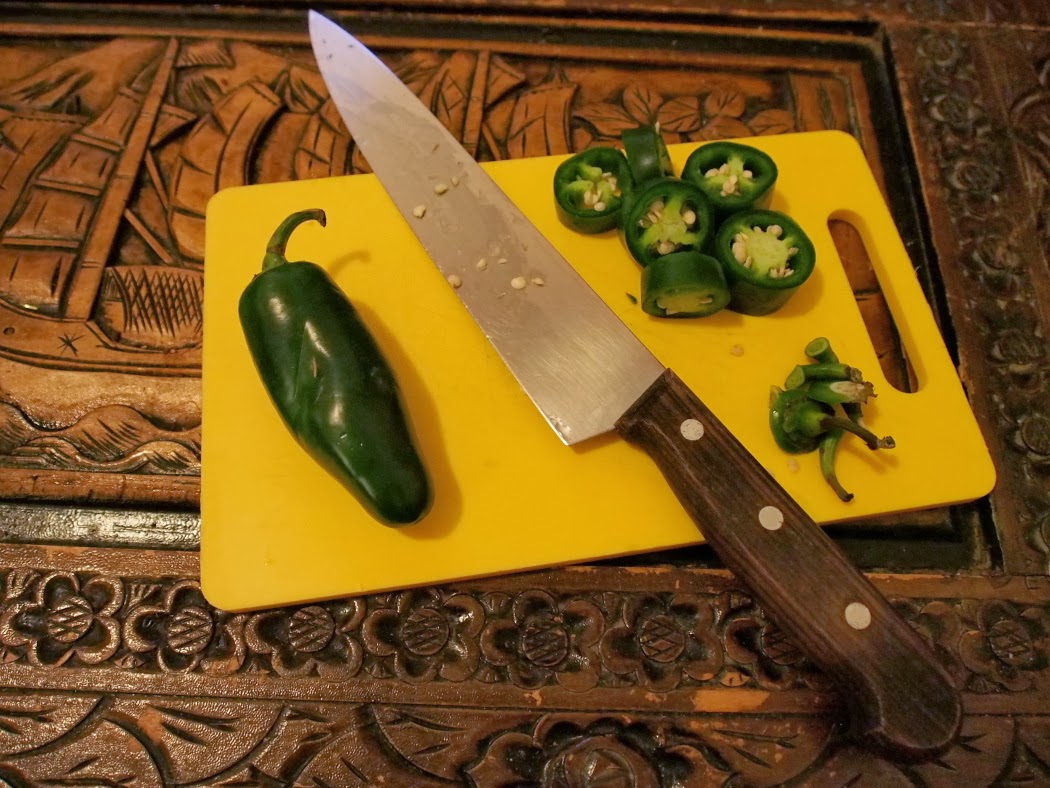 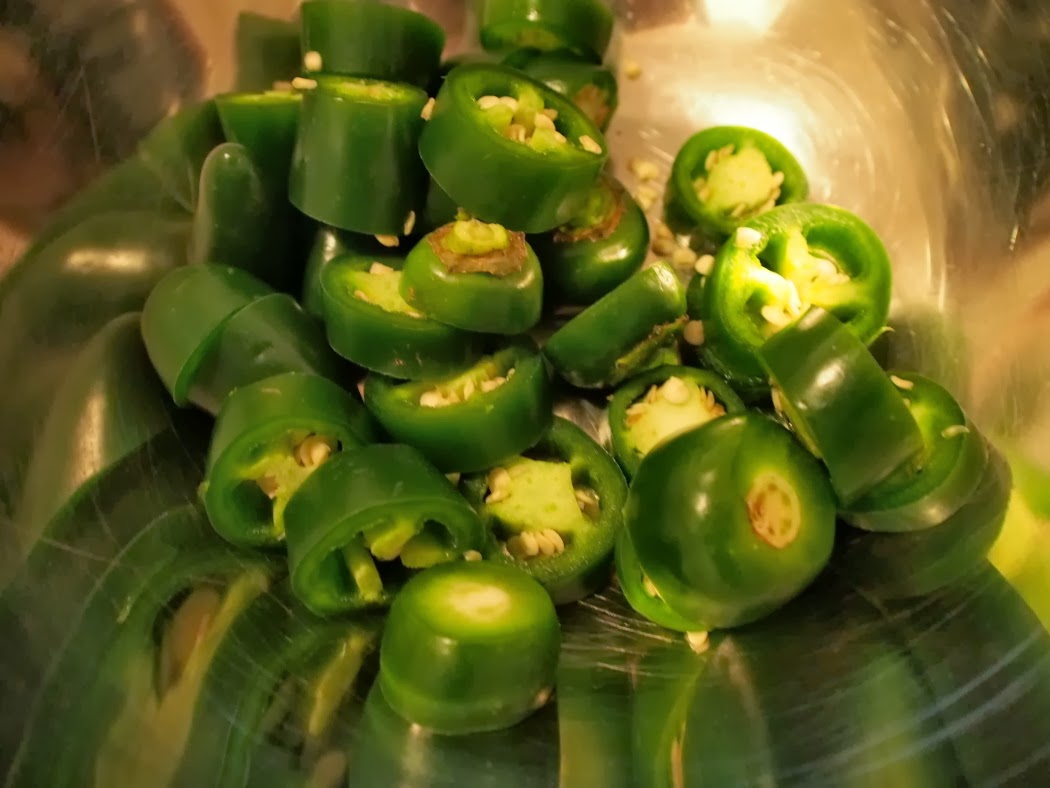 But seriously, melodramatic rant aside, one of the first recipes I made for this blog was a Homemade Tomato Ketchup with Chipotle and Ancho Chillies.  It tasted pretty good, but it was early in in my preserving adventures and I made 2 crucial mistakes: 1) it wasn't tomato season and, 2) I think I added too much vinegar (rookie error).  So I was hoping this sauce would restore faith in my abilities and turn out a bit better than the ketchup.

For me, the other issue with making sriracha sauce, is my questionable tolerance to chilli.  Don't get me wrong, I really love chilli, but unfortunately I've got the 'sweaty reaction' gene, so after eating a couple of chillies or something particularly spicy, I end up looking like I've just walked through a car wash. 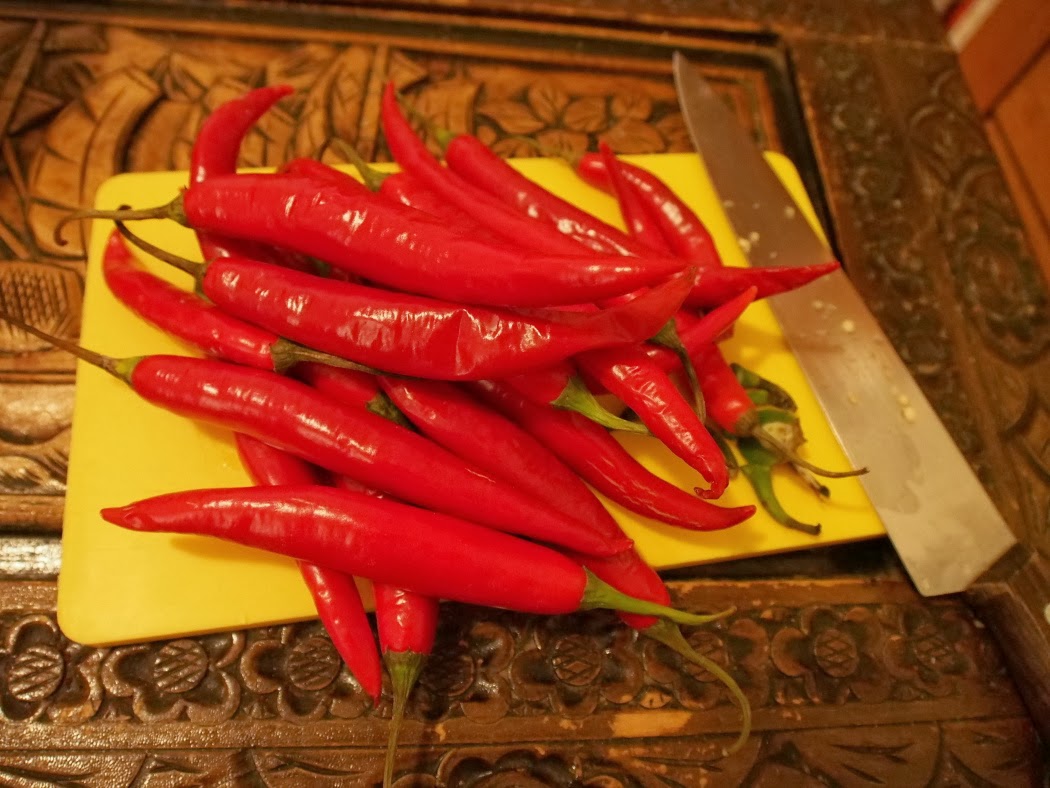 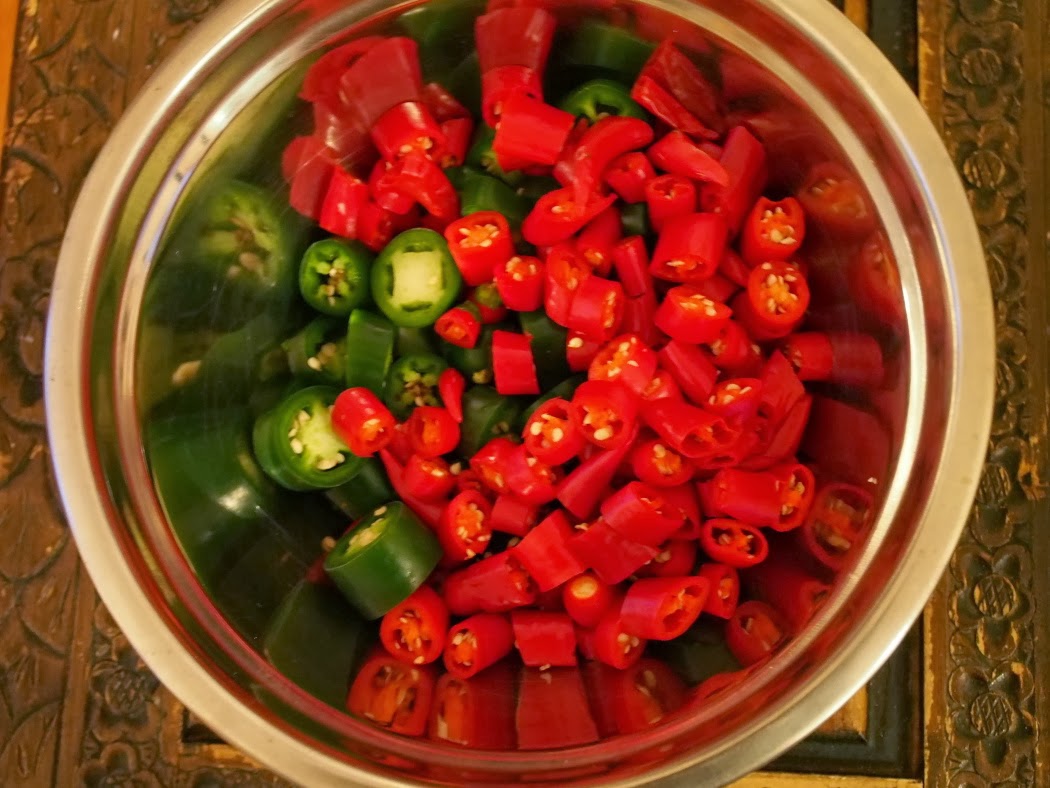 But even in light of these obstacles, I pressed on and set out on the arduous journey towards sriracha perfection.

The first step was getting hold of some appropriate chillies.  Most of the recipes online ask for red jalapenos and long red thai chillies.  I managed to find the long red ones quite easily (they're available everywhere) but I could only find green jalapenos at Paddy's Markets. I decided that the green ones would have to do. 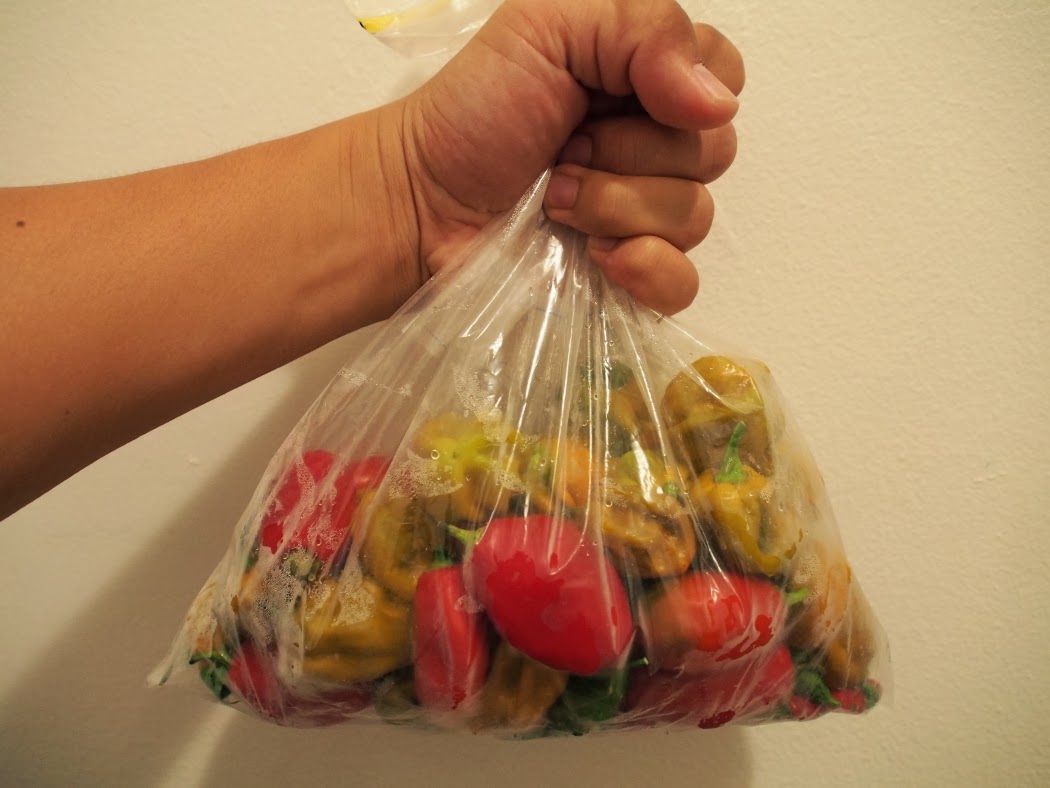 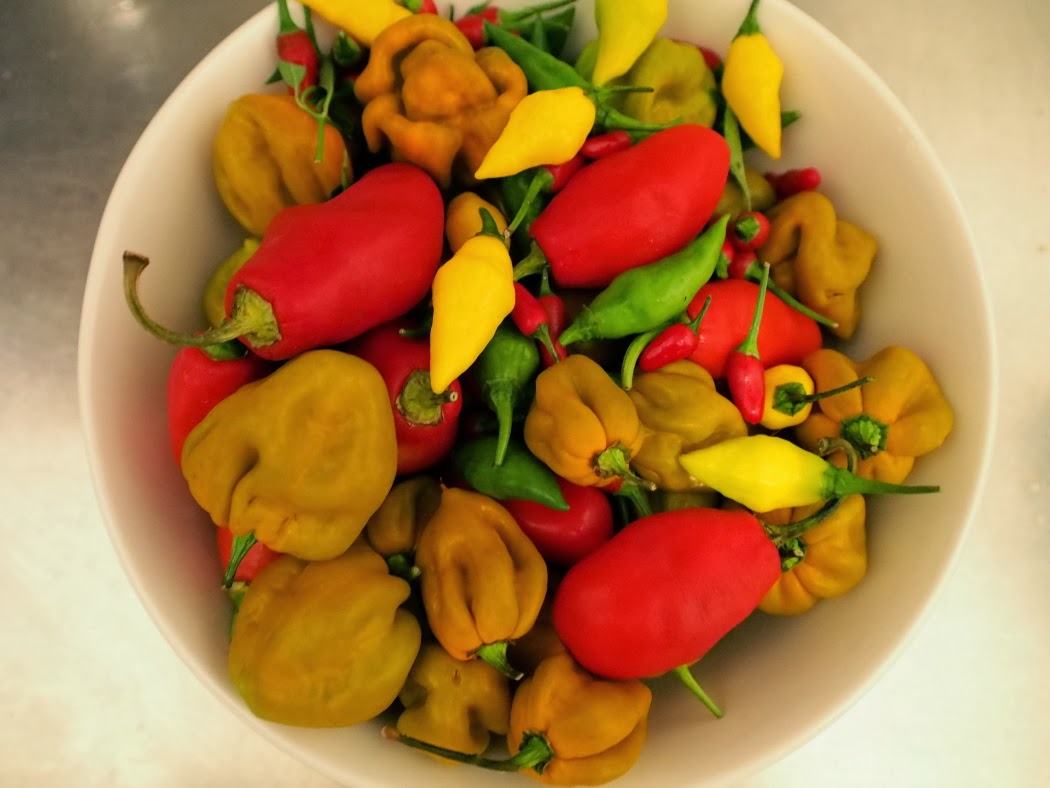 One of my mates, @thetalentedmrhatten, moved houses last year and his new place had a big balcony, on which he's started growing some herbs...then fruit...then more herbs... and then he just went a bit crazy with growing chillies.  He cultivated four different types - Red Rocoto chillies, little red African Peri Peri chillies, lemon drop peppers (aji limon), and the fieriest of the lot, the orange Habanero chillies.

His chilli plants were all going mental, so he had an abundance of chillies and no idea what to do with them.  That's where I stepped in to save the day, and proposed a chilli exchange - fresh chillies in exchange for Sriracha - it's a win-win situation! So one night he rode over on his motorbike, dressed in ridiculous Robocop-esque motorbike armour, and dropped off a great big bag of them.

Now that I had gathered together a haul of diverse chillies, the next step was the fermentation - the key to Sriracha's unique flavour.  Suspecting that @thetalentedmrhatten's chillies would be quite spicy, I decided to keep the store bought chillies separate from the home grown ones, and make two different batches.

Blending up the chillies with some salt and sugar draws out the water and prevents spoilage, and simultaneously promotes the growth of good bacteria that creates lactic acid and promotes preservation. 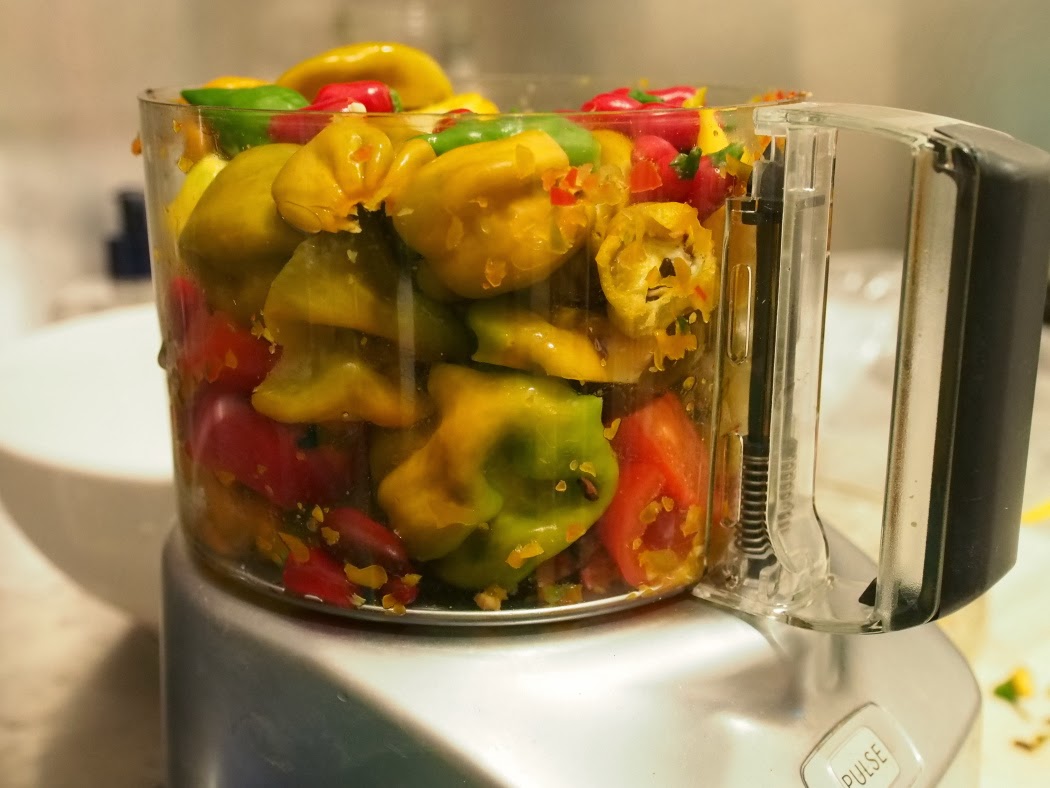 Post-blending, the store bought chillies smelled great, particularly with the addition of a load of garlic cloves. The home grown ones on the other hand, smelled intense; really really intense.   First you'd get a nice fruity, floral fragrance, probably from the lemon drop peppers, but this pleasant smell was then followed with an overpowering waft of Capsaicin, the active ingredient in chillies.  It really cleared the sinuses! And I was sweaty already, and I hadn't even tasted it.

I kept the blended chillies in a few jars at room temperature for a week.  Over the course of the week they softened and the blended mixture expanded as gas was produced from the fermentation.  The scent of the mixtures also changed, mellowing out and started to smell like the real deal. 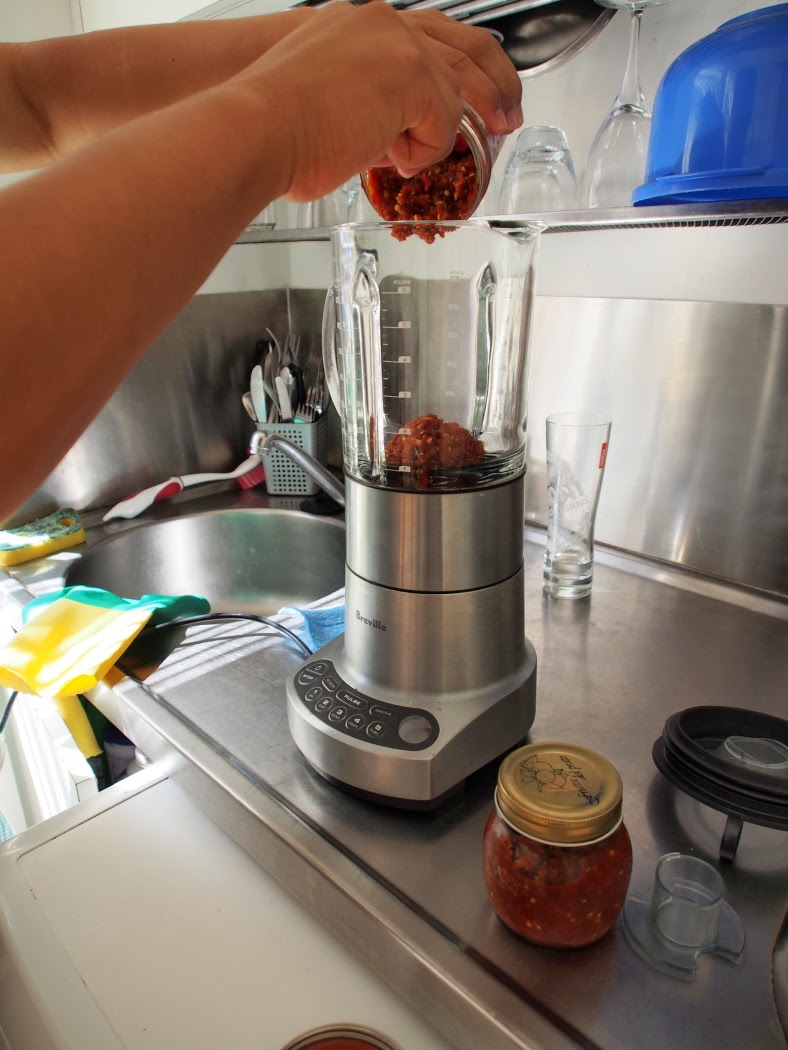 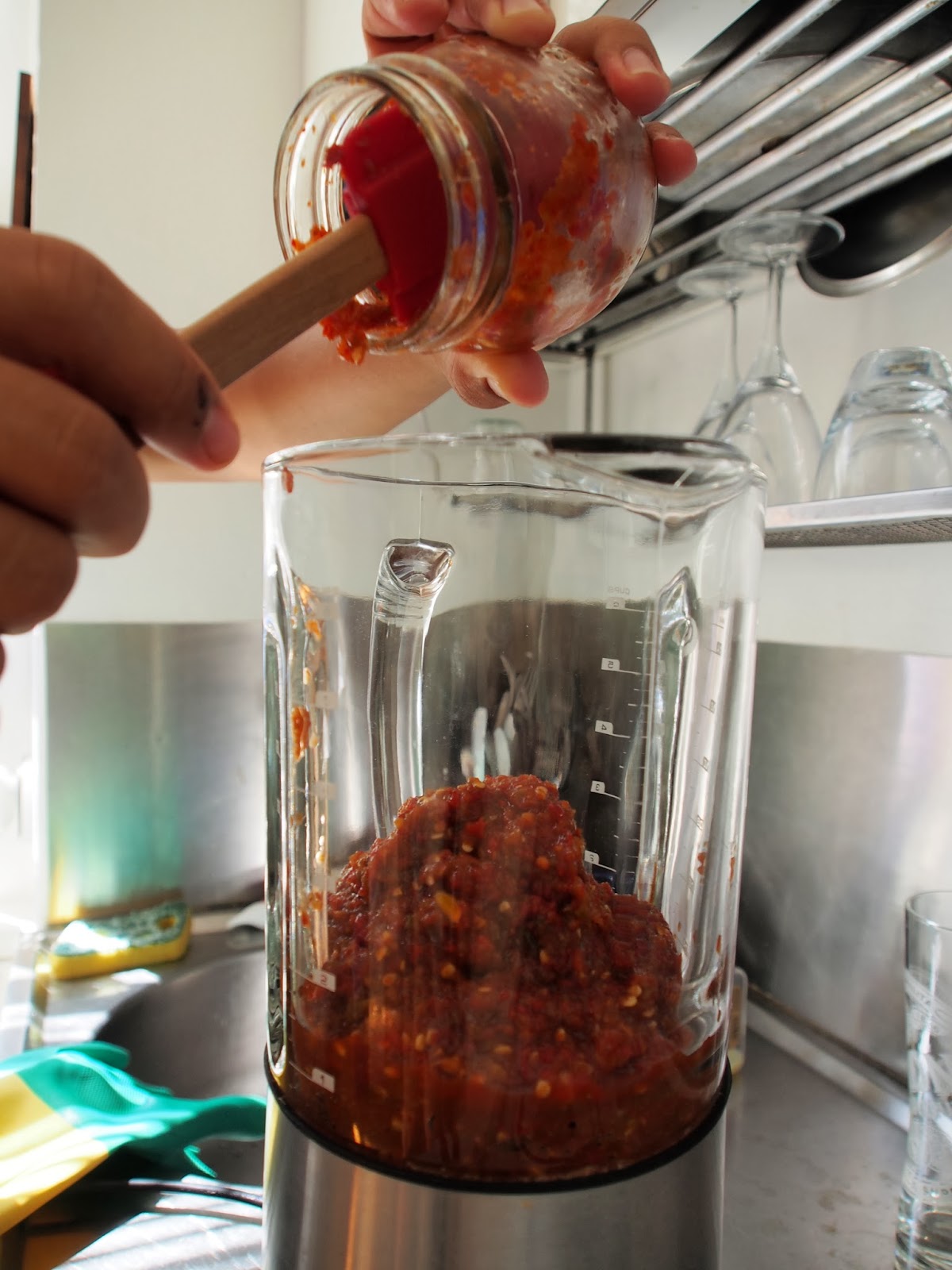 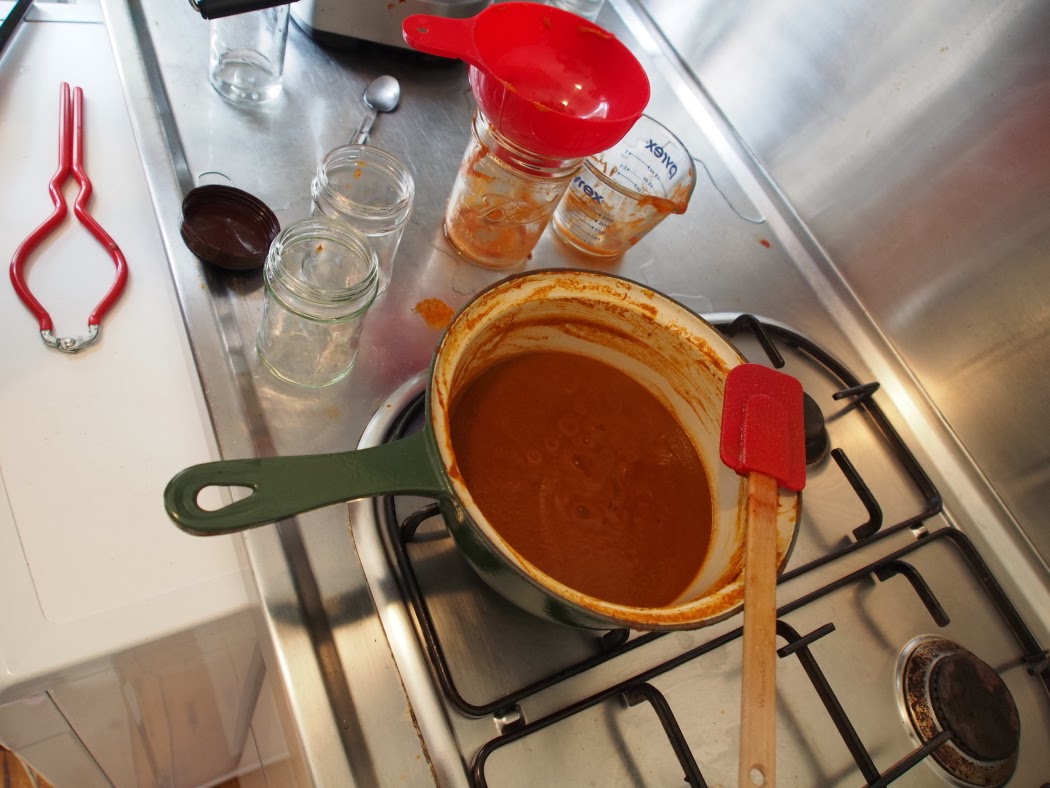 At the end of that week, I took the batches and blended each of them up separately for a few minutes until they were totally puréed.  I also added vinegar to the sauces (an important component of Sriracha) before they were cooked down to a perfect consistency.  It was a pretty messy process, which was also fraught with danger - I managed to get chilli all over my face, which was a particularly bad idea with the homegrown chilli sauce, which burned in the same way that I imagine tear gas does.

The end result was mixed.  The store bought chillies were excellent.  I tasted just like regular Sriracha, with a bit more of a fruity flavour - the taste of real chilli.  On the other hand, my mate's home grown chillies, when blended up and boiled down into a concentrated, lava-like concoction, was absolutely bloody toxic.  The initial flavour was really interesting and floral, but this gets wiped out by an overwhelming heat, that not only lasts for ages, but may also cause other, uhum, ramifications a few hours later.  And I only had tasted about a quarter of a teaspoon!
In Part II of the Sriracha saga:  The Sriracha Strikes Back, I'll let you know how I go in my attempt to reign in my toxic sauce....