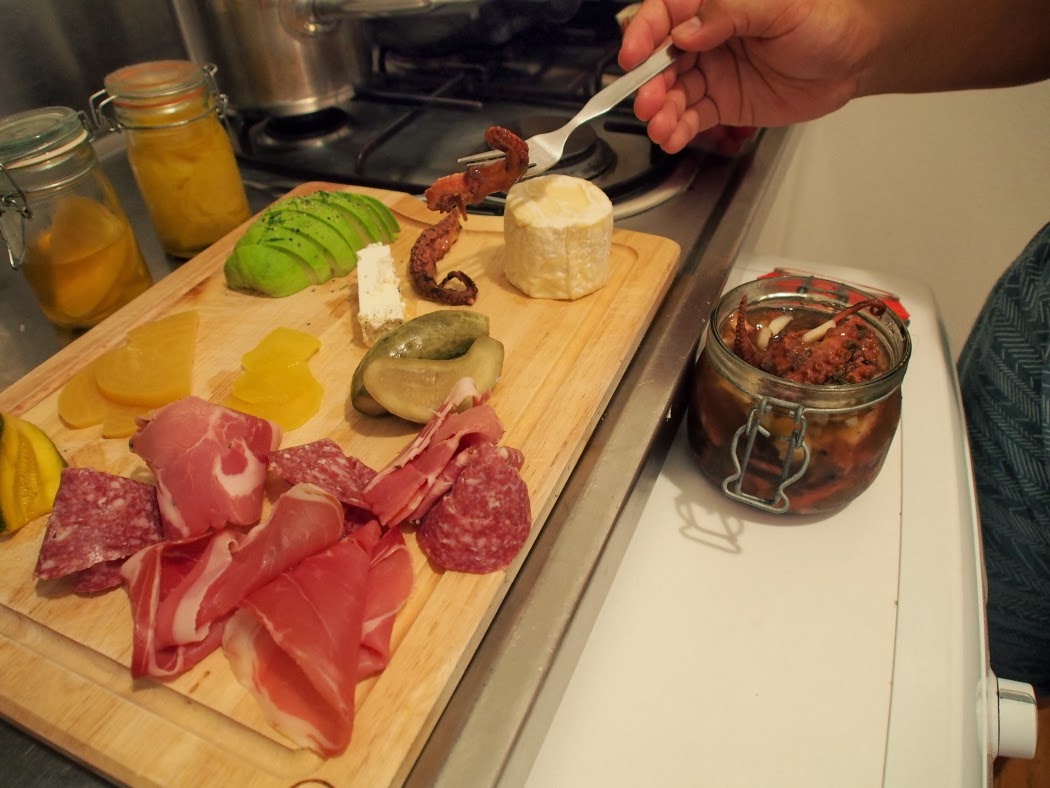 You might remember my post a couple of weeks about making dill pickles from Kirby cucumbers that I found at the Sydney Markets at Flemington.  This trip to the markets was extremely fruitful (pun intended).  The Sydney Markets are expansive. There’s a plethora of fruit and vegetables, but you can also buy flowers and meat. 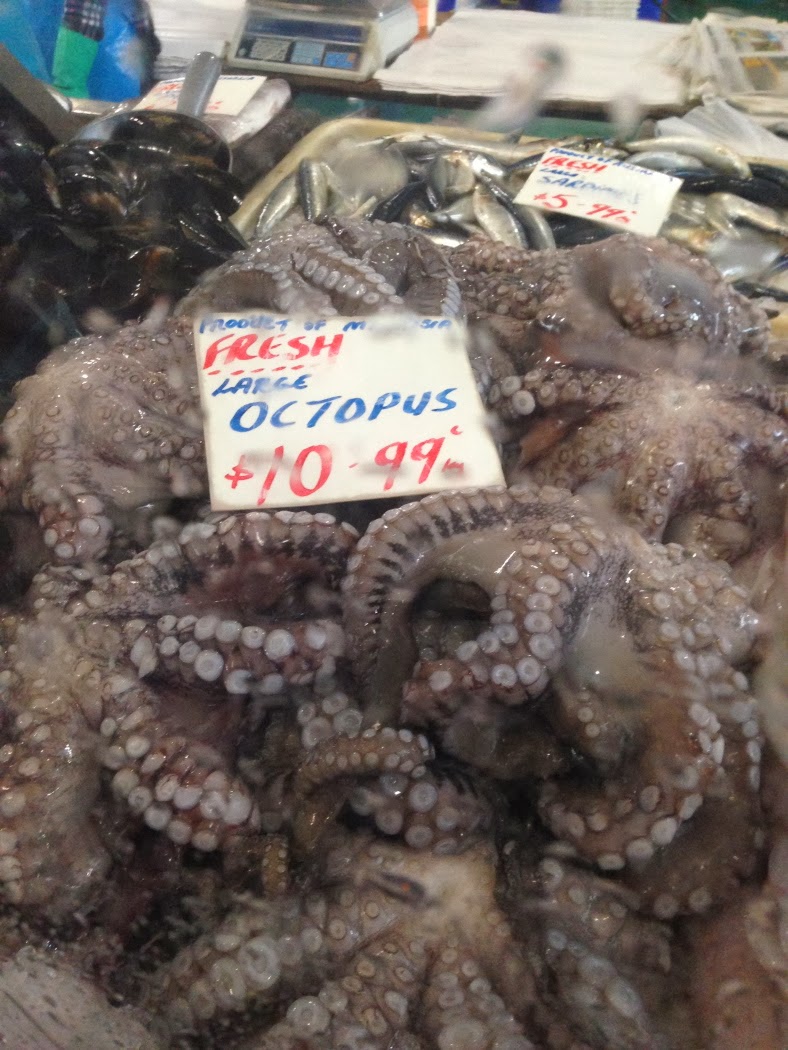 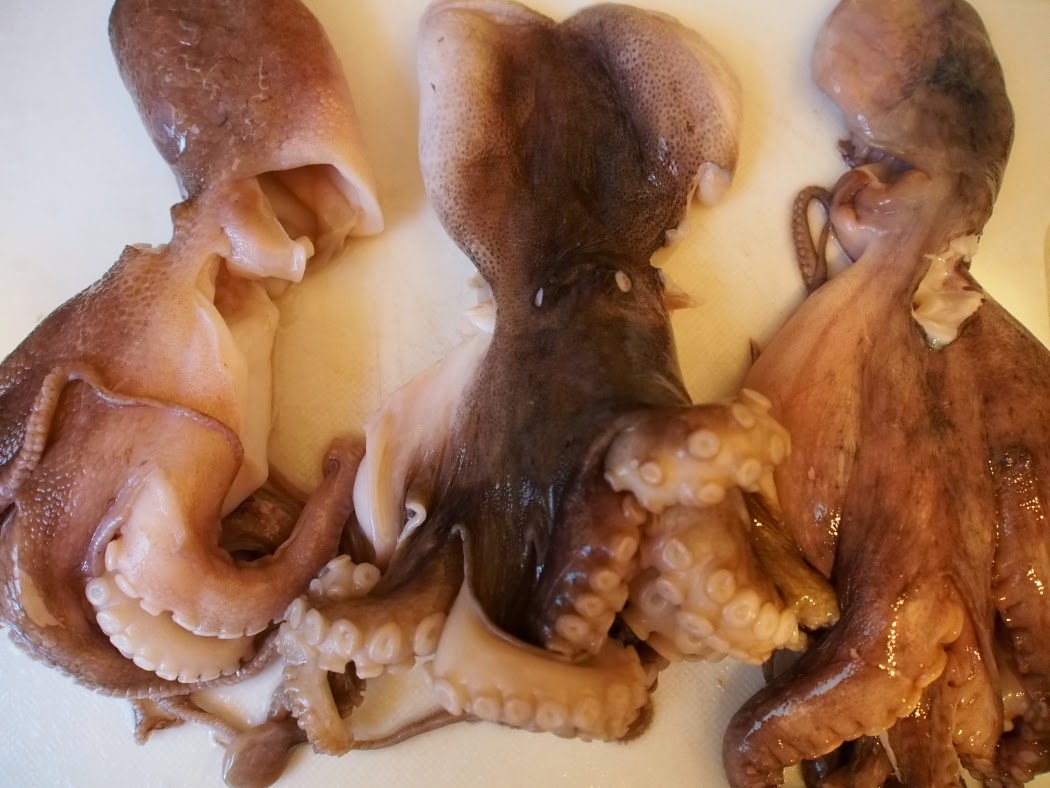 I was also surprised to find that despite being in the middle of Sydney’s Western Suburbs, about 20km from the coast, there was an abundance or really fresh seafood.  While buying some prawns and a flounder for dinner, I spotted some nice looking octopus (if there is ever such a thing as nice looking octopus?) And I had always wanted to make pickled octopus…. So, without mentioning it to my girlfriend who was waiting for me patiently, I impulsively bought a whole kilo of slimy, tentacley goodness.  Later that week, one of my friends was hosting a thanksgiving dinner, and I had promised to pickle something.  So I thought I’d do something a bit different (and possibly completely incompatible with the other thanksgiving fare) and pickle a bit of octopus! 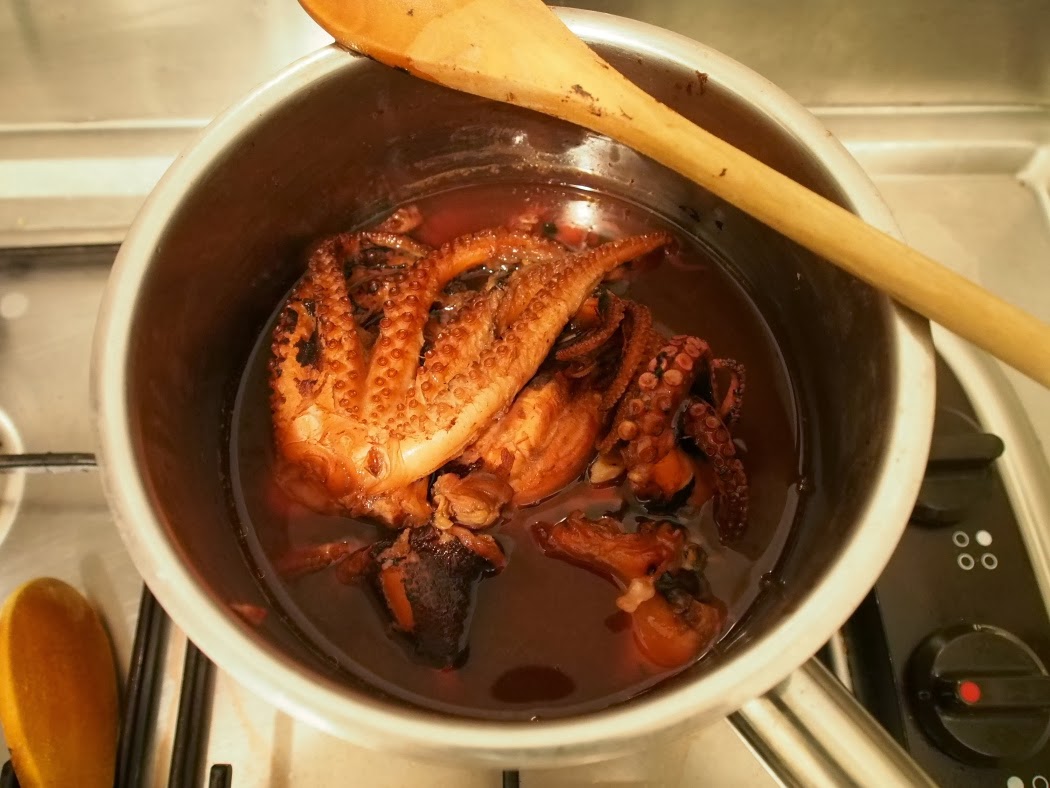 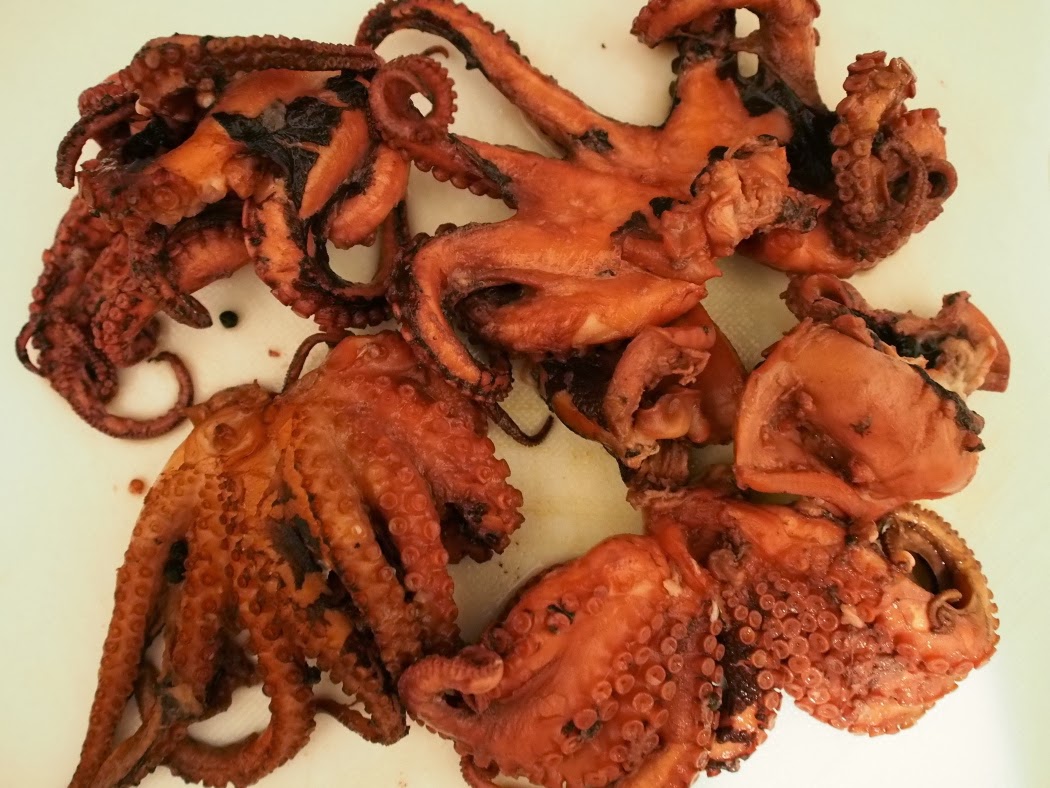 The first time I tried pickled octopus was at Xanthi, a Greek restaurant in Westfield Sydney.  I remember it tasting like the essence of Greek cuisine. But I am no stranger to pickled seafood.  In my travels through Northern Europe I was lucky enough to try pickled herring in a few Scandinavian countries (something I do have plans to recreate when I figure out how and where to find herring in Australia).  While pickling seafood may, on the face of it, be a cooking method that people traditionally used to preserve their catch for later, I think it’s a great way to have seafood.  It pretty much takes the freshness of seafood, and adds a good bit of zing from the vinegar. 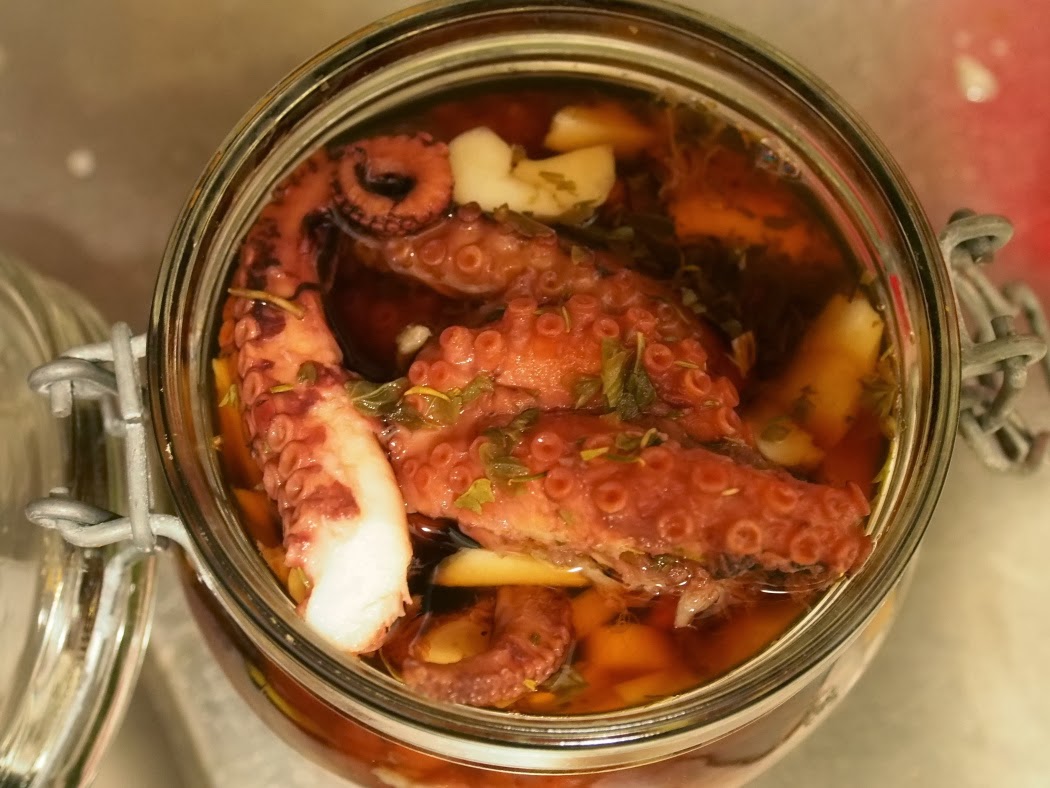 In the batch I made followed the Mediterranean style -  I added lots of garlic (because who doesn’t love garlic) and some oregano and thyme for flavour.  Pickled octopus is perfect tossed through salads or just on its own – in our case straight out of the jar - as antipasti.  The key to the recipe below is how you cook the octopus.  Cooking it low and slow makes the flesh super tender, instead of being tough like octopus has a tendency to be. 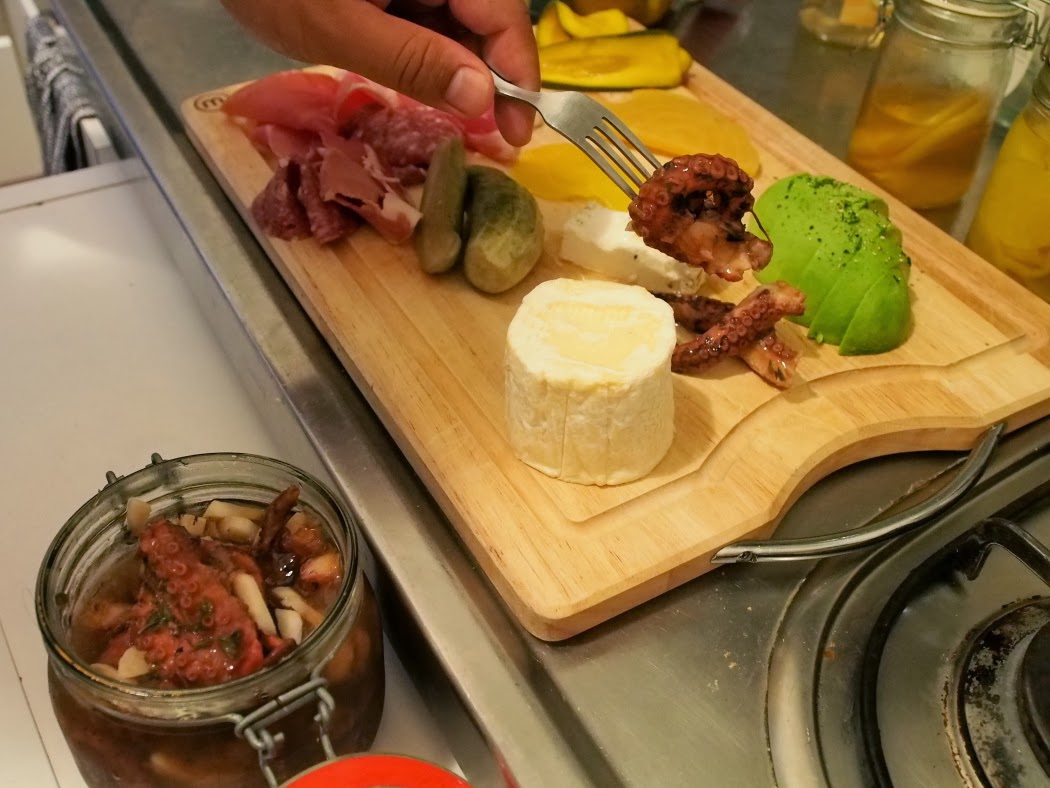 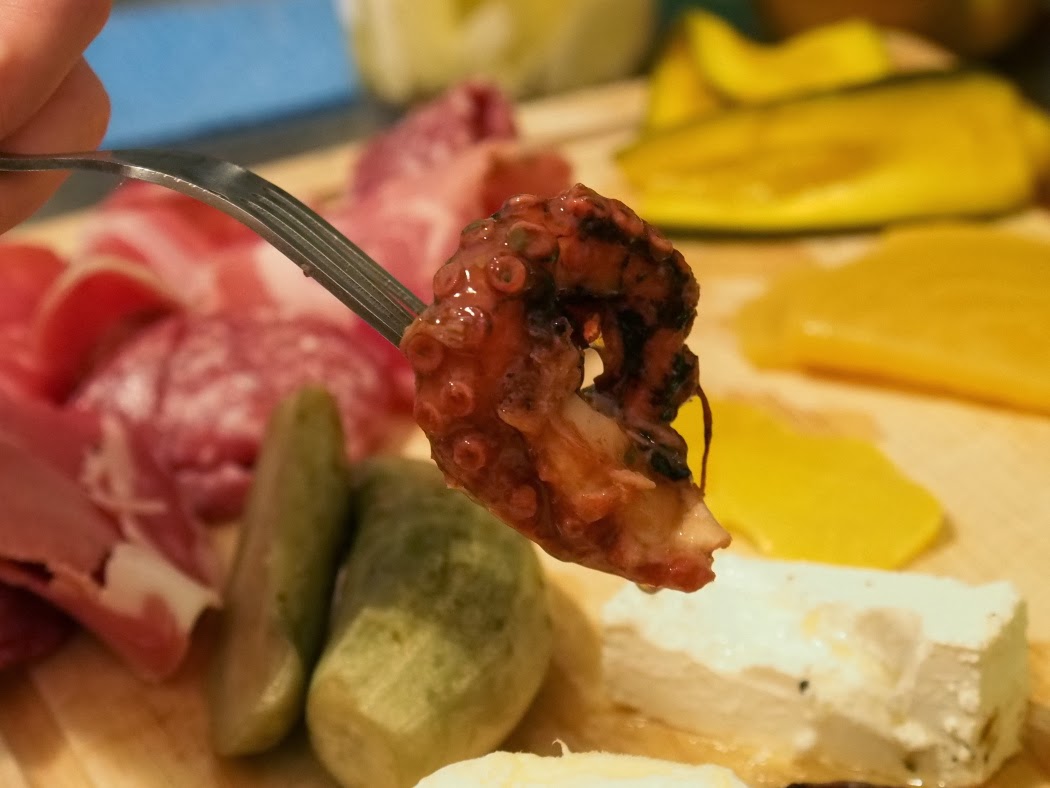 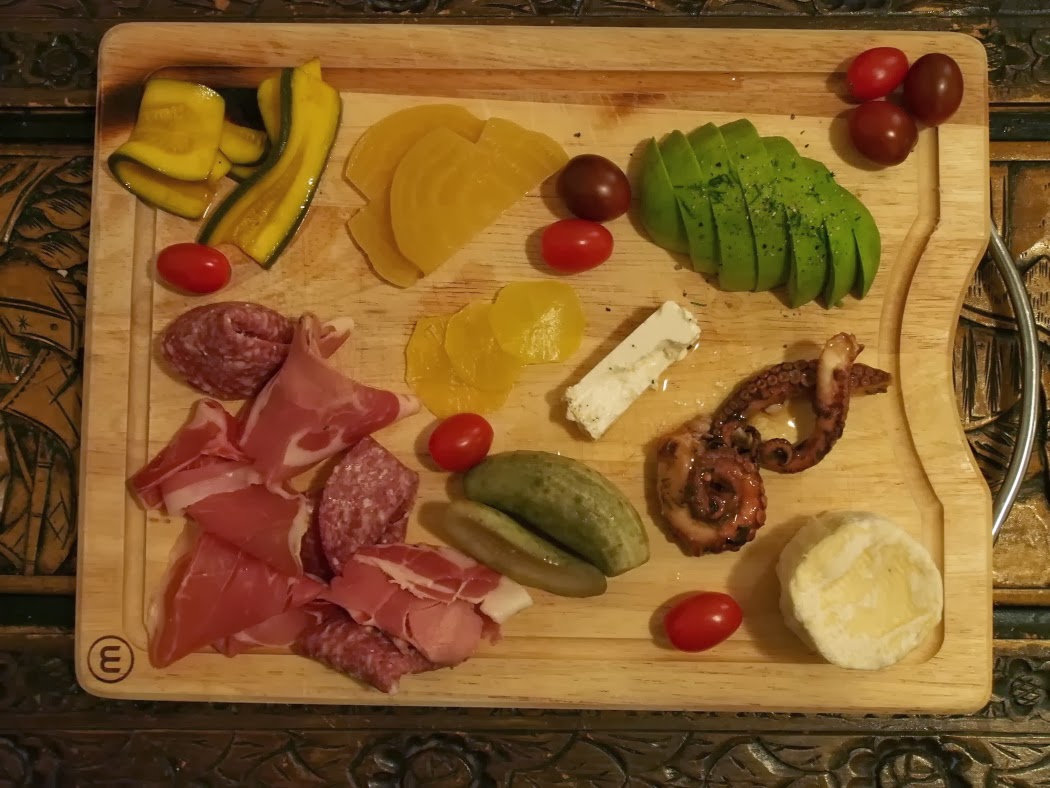 In the end, the octopus was really popular at the thanksgiving dinner (despite the fact that pickled seafood isn’t really one of your traditional American Thanksgiving dishes like turkey or pumpkin pie…) and I think I surprised a few of my friends who doubted that any type of vinegary seafood would ever be tasty.

I also made a second batch to eat at home.  For dinner the other night, the pickled octopus was the star of a board of pickles, antipasti and cheese.  It was a great way to use some of the things I'd pickled previously, like the kirby cucumbers, daikon, zucchinis and golden beetroot.  I also got my hands on some great salami and prosciutto, and a triple cream brie.  Some fresh avocado and cherry tomatoes filled the gaps on the board.  Give it a try and let me know what you think!

What you need:
The pickling: