Lemon and Lime-oncello with a hint of Eurovision 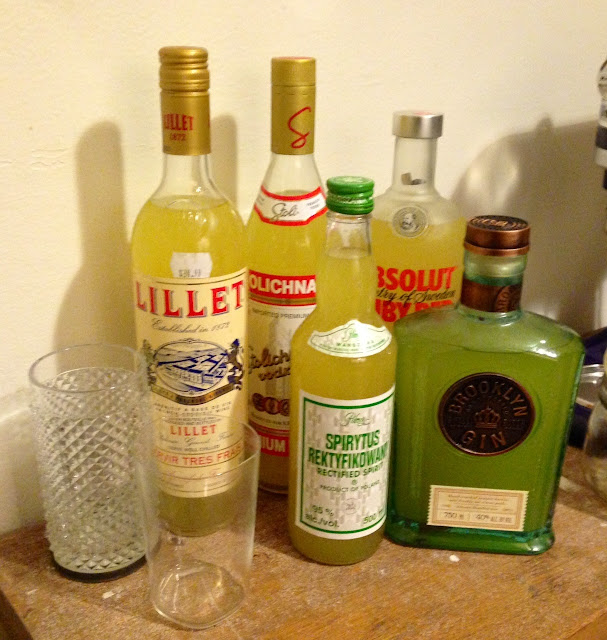 I was having dinner one night with some close friends who live across the road from us.  I'd heard good things about Vacanza in the Hills Pizzeria in Surry Hills so we decided to check it out.  The pizza was fantastic.  Probably the best pizza I've had in Sydney (which I know is a big call, but having tried some of the other places in the area like Lucio Pizzeria and Pizza Mario, I think Vacanza takes the cake - or takes the nutella calzone and tiramisu desserts which were on the menu). 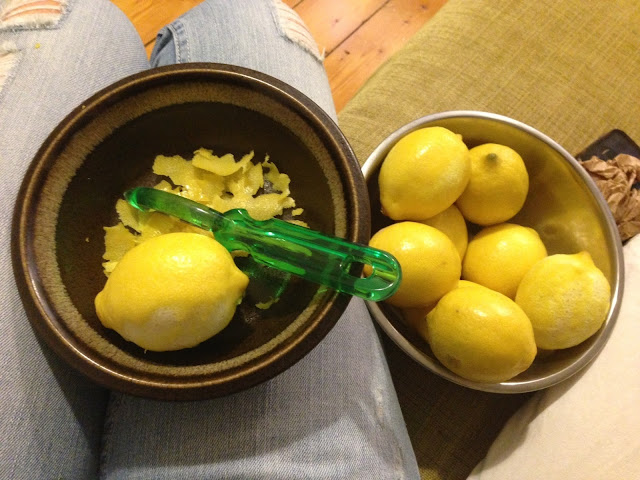 We had almost finished our pizzas when we realised that we hadn't received one of the other charcuterie dishes - a mortadella special. 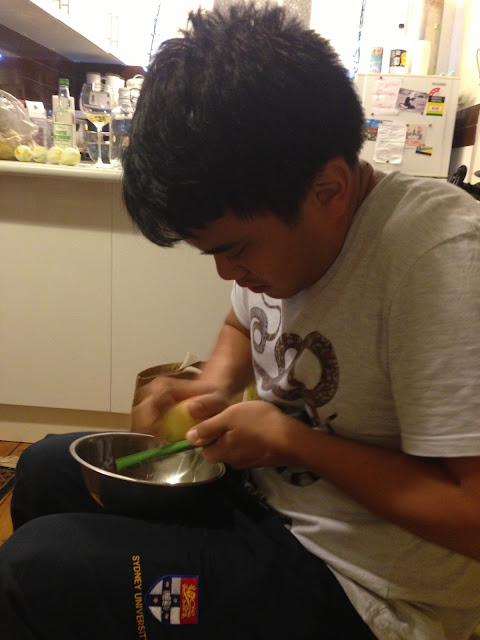 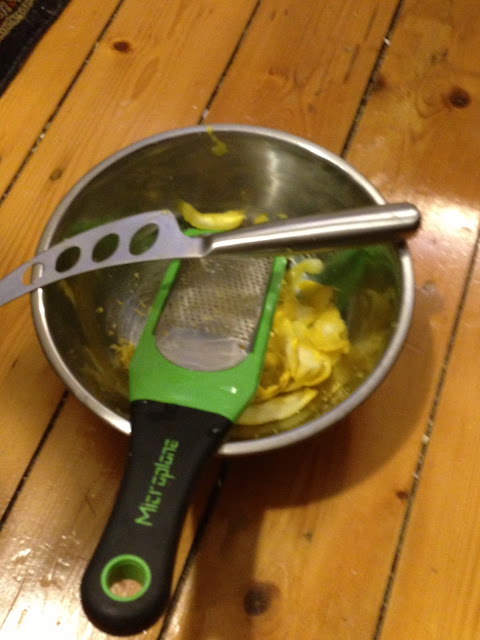 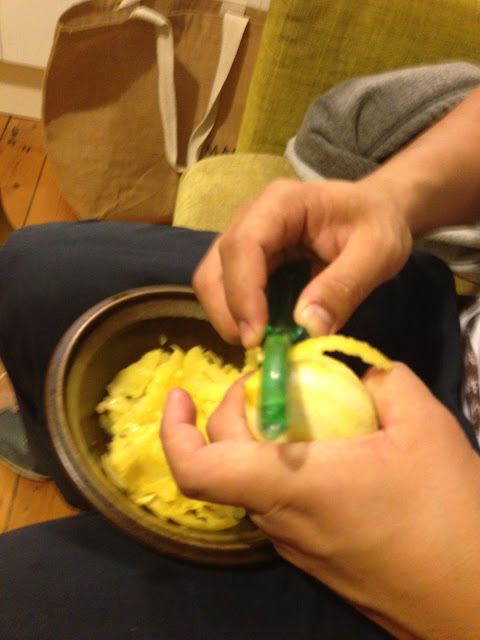 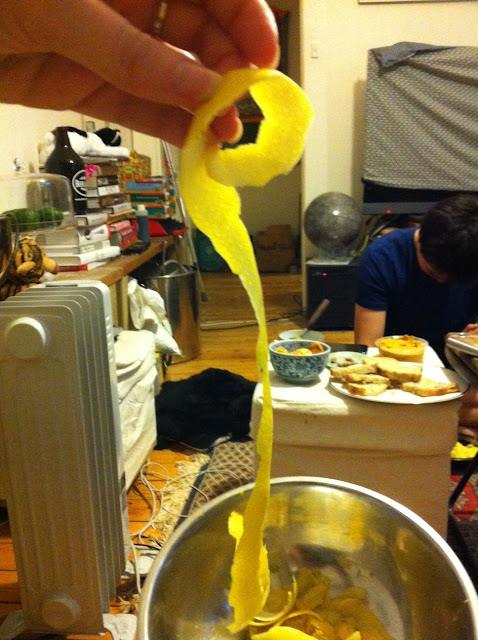 Eventually it arrived, and the waiter was really apologetic.  At the end of the meal, he brought out a tray of  limoncello shots to make up for the lateness of the mortadella.   The limoncello was excellent and turned out to be a bit of a highlight of the meal.  It was really smooth and extremely lemony, without the harshness of some of the other limoncellos I've had. 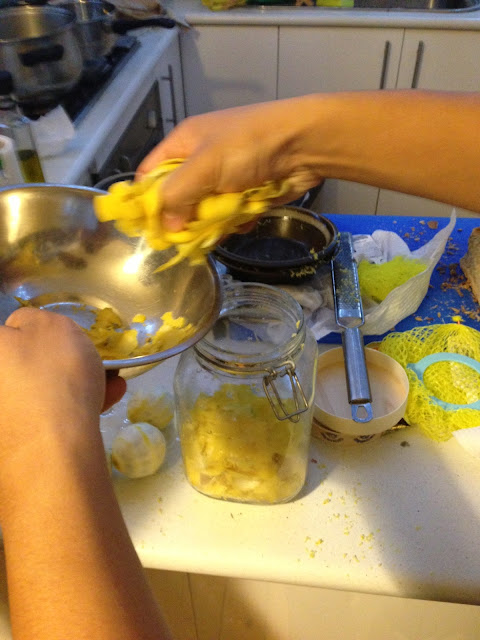 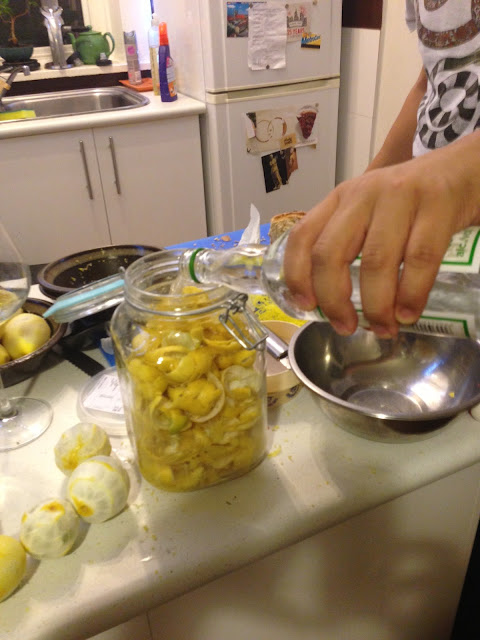 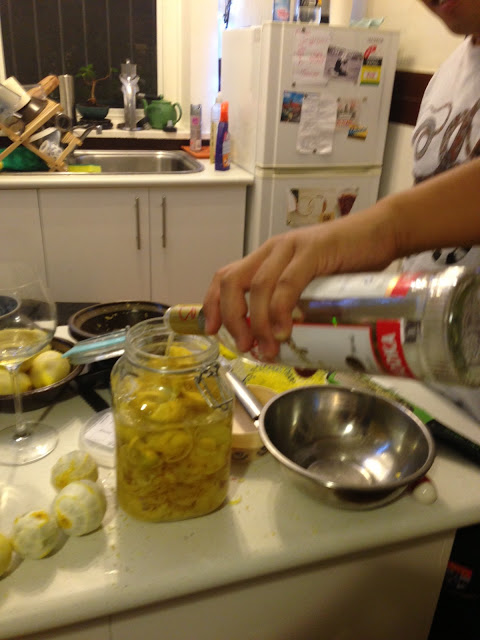 Sipping on the bright yellow liquer, my mate (who brews his own beer) raised the question of whether we could actually make our own limoncello.  Coincidentally he and The Darling Baker had quite a few limes lying around that needed using, and we couldn't think of any reason why limes couldn't be added into the mix, so we decided to concoct a Lemon AND Lime-oncello as a bit of an experiment. 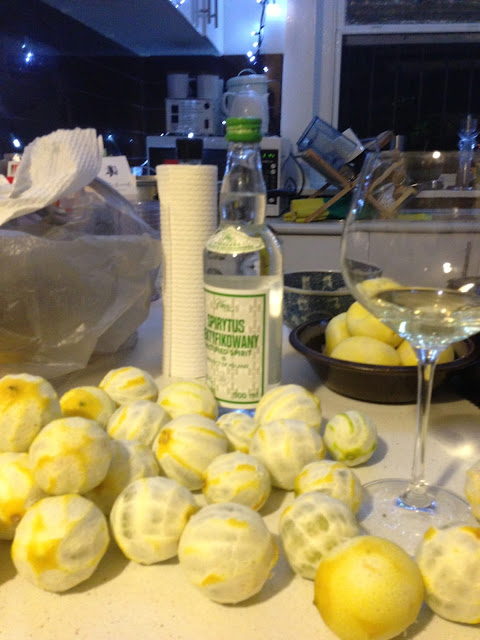 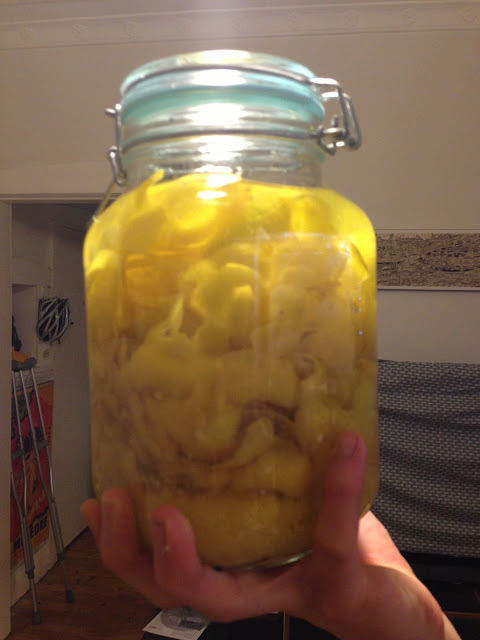 While you'd think the most important ingredient in limoncello is the citrus, I'd say the most important ingredient is actually the alcohol.  The stronger the alcohol, the more of the lemon flavour and colour is extracted. Many American recipes ask for a spirit called Everclear, which is a grain alcohol that is close to 100% alcohol, but we couldn't find anywhere in Sydney that stocked it and we didn't want to go to the expense of shipping it out from the USA. 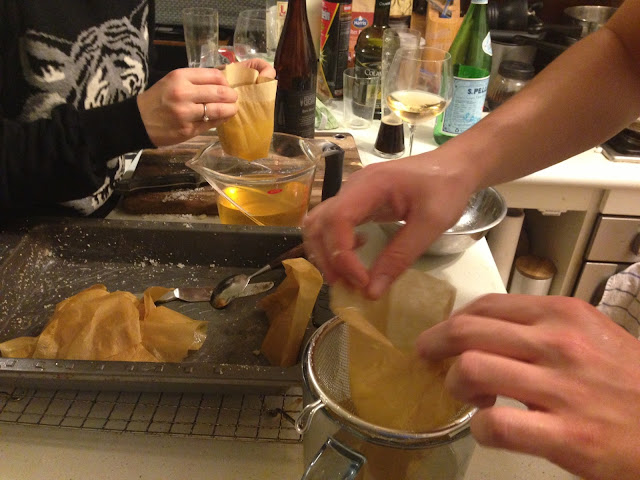 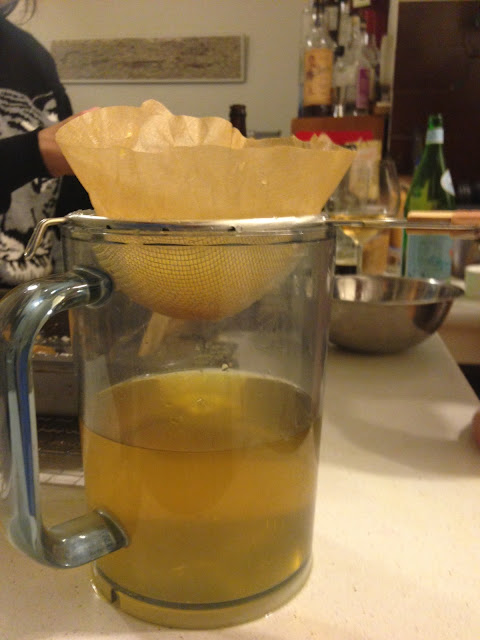 My mate did some research and found out that you could actually purchase a 95% grain alcohol from Dan Murphy's called Rectified Spirit.  The stuff is actually from Poland, and is so potent that you have to ask for it at the counter because they keep it locked up in a cabinet.  The bottle is labelled with the Polish words "SPIRYTUS RECTYFICOWANY" which made us slightly concerned about how strong it would be and whether it would taste any good.  It comes in a small 500ml bottle with a price tag of $58.99, so we decided that it wasn't very cost effective for us to only use the rectified spirit to make the limoncello.  Also, we thought it would be prudent to add some vodka into the mix too, as a way of possibly taking the harsh edge off the rectified spirit. 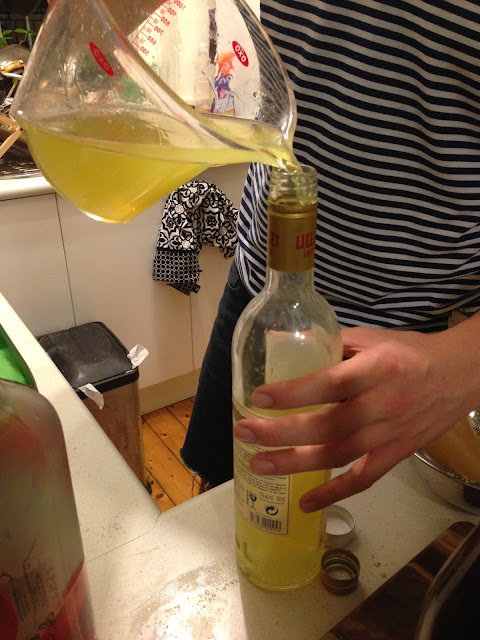 The process involves a fair bit of patience.  It's time consuming grating or peeling off all of the rind from the fruit.  We did this while watching the Eurovision song contest on SBS.  I definitely think the cheesy songs, unnecessary fireworks, and over the top costumes/strange haircuts (see below) really enhanced the flavour of the limoncello in the end. 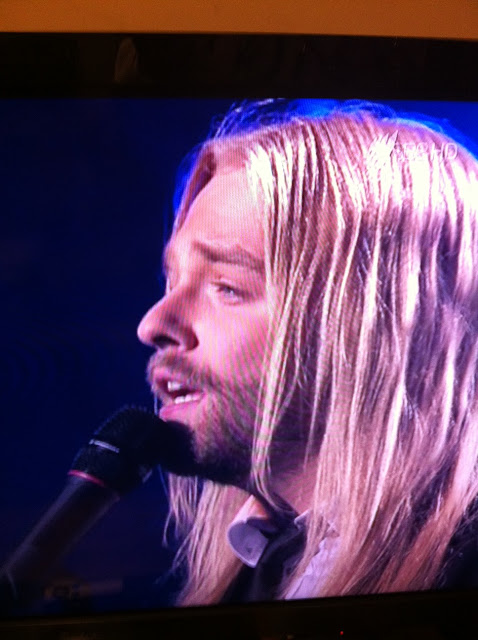 The other annoying part of making limoncello is that you have to wait three or four weeks until the alcohol has extracted all of the flavour from the rind.

So did the experiment pay off?  Yes, most definitely - it was worth the effort and patience. The end result was really tasty and extremely lemony.  I couldn't distinguish the lime flavour from the lemon, but I'd say you would be able to tell the difference if you compared our batch to one without limes.  We filled some old bottles up with our concoction and now they're perched on my book shelf, ready for a quiet nightcap, or a lemon fuelled rampage. 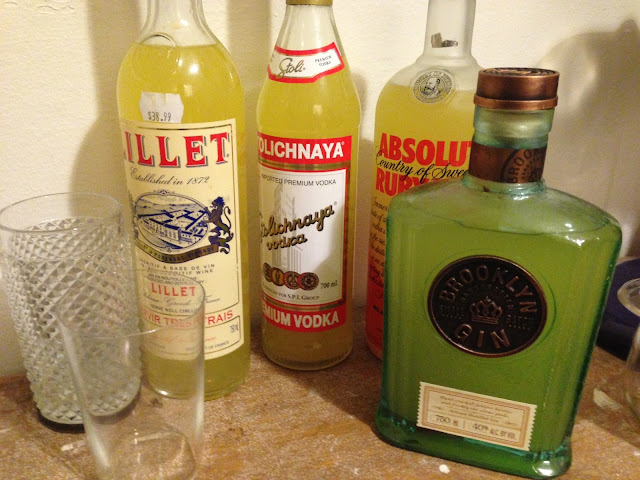 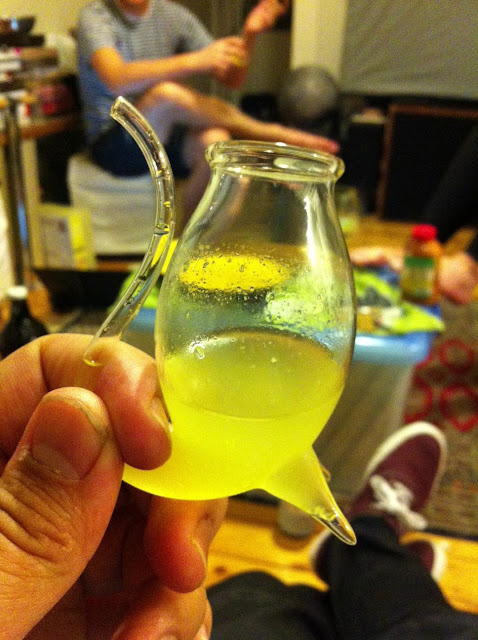 Note:  Drink responsibly.  Avoid heavy machinery.  Jarhead does not condone the improper use of lemons and limes as described above.
Posted by Jarhead at 09:09