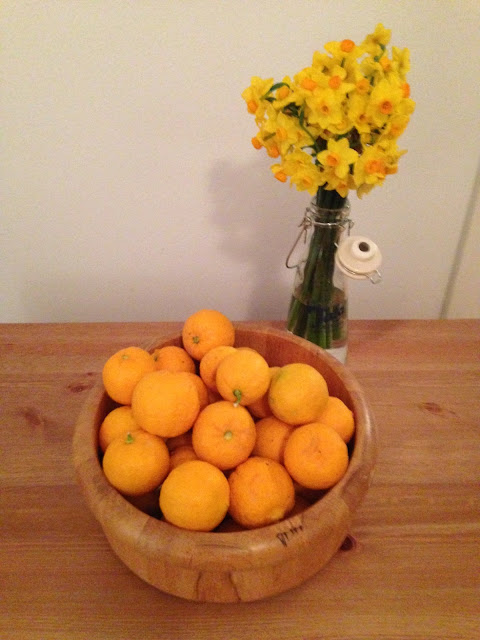 On the same weekend that I was down in Canberra making Pickled Golden Beetroot, I also managed to bring back some fresh produce, mostly from my girlfriend's parents' garden where they grow heaps of fruit and vegetables. But also from next door... 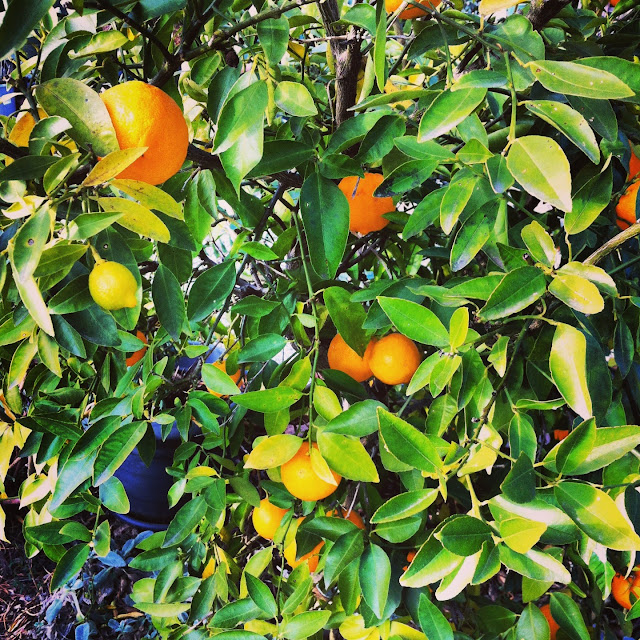 My girlfriend's dad mentioned that the next-door neighbours had a large lime tree that was going a bit mental with fruit.  Being Canberra, neighbours are much more friendly than the ones near my place in the inner city (who tend to not have enough space on their tiny balconies to grow enormous lime trees).  Apparently, the neigbours weren't using the limes and were more than happy for us to use them so we went next door to pick  a few.  But I didn't end up with just a few...  I ended up with close to three kilos! 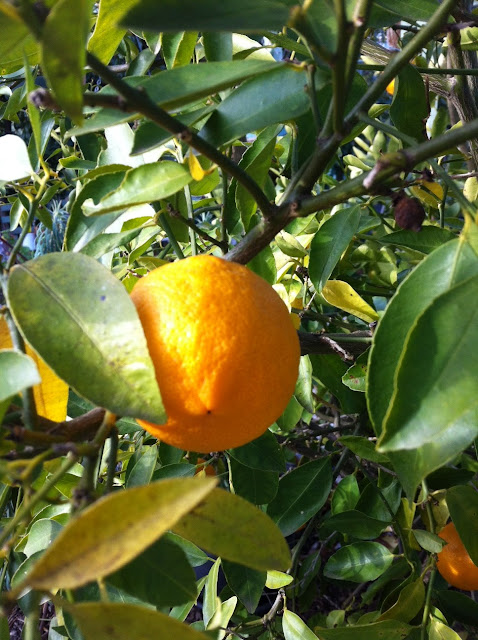 These limes were intriguing.  They had orange skin rather than green.  They had a similar fragrance to standard limes, but the pulp inside looked more like that of an orange.   And they tasted like sour mandarins.  Were these really limes?  My girlfriend's dad must have seen a puzzled look on my face and assured me that they were.  In the absence of any other information, I took his word for it and brought my haul of "limes" back to Sydney. 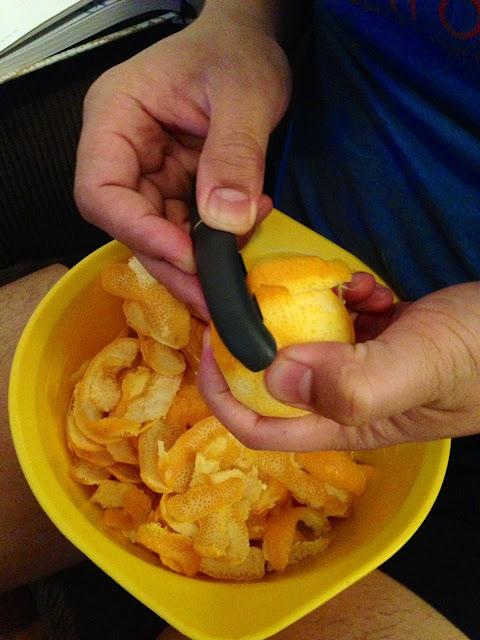 Back in Sydney, I did some digging on the internet and found out that the unknown fruit were actually Rangpur "Limes".  They aren't actually limes but are pretty much a hybrid of lemon and mandarin that can be used as a lime substitute.  Interestingly, they're named after a Bangladeshi city.

I flicked through recipe books and searched the internet to see what I could do with the Rangpurs.  Marmalade was the most obvious choice, and given the nice smell of the zest, I was pretty sure it would  make a decent one. 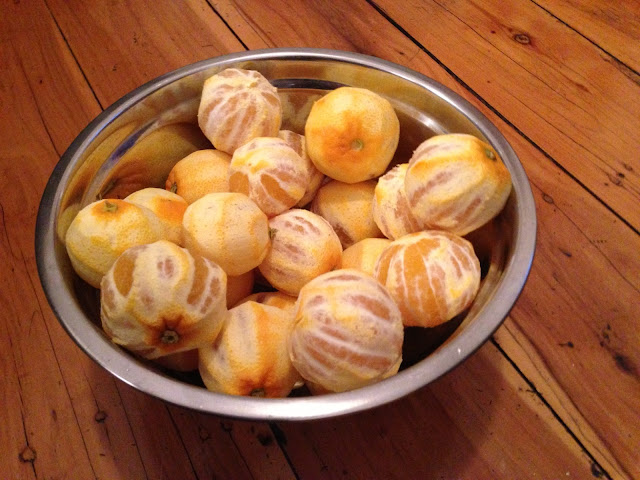 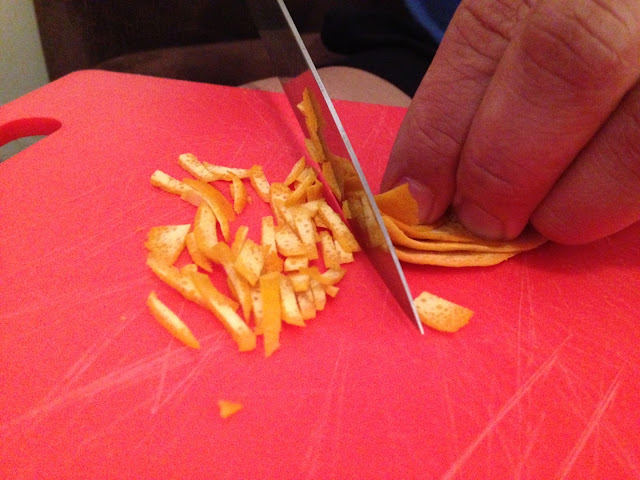 When I researched marmalade recipes, I decided to refer to a book I'd recently bought.  Saving the Season by Kevin West is one of the best books about preserving I've seen.  After reading an article about West in the Lucky Peach magazine and I was pretty keen to track down his book, so I shipped it in from the UK.  It has some really interesting recipes and some detailed explanations on the basics of making jams, marmalades, pickles and other preserves.  The book is easy to read and eloquently written, and has some beautiful pictures too. 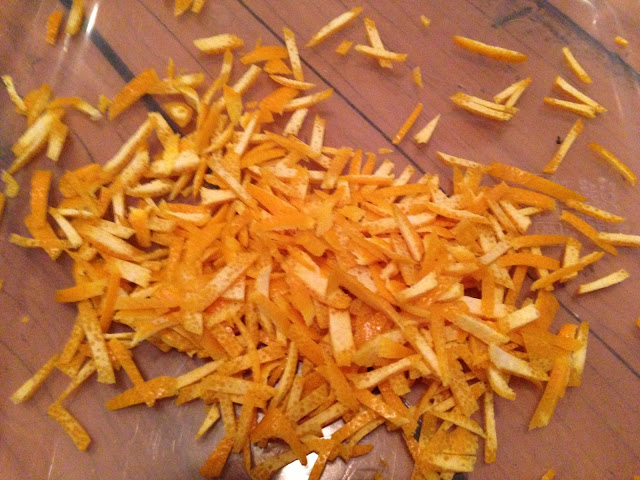 West has several different recipes for Marmalade.  The one that inspired my recipe was for 'Fine-Shred Lime or Lemon Marmalade'.   The recipe runs over a three day period and is quite time consuming, but it's geared towards limes which have a lot of pectin, which helps the marmalade set.  I hoped that it would translate to the Rangpurs. 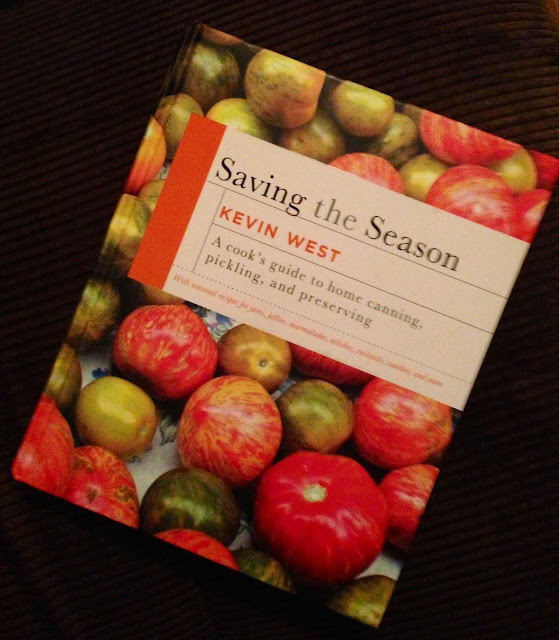 I also thought it would be nice to add something else to enhance the flavour.  I'd been to an awesome Chinese restaurant earlier in the week and had been drinking Jasmine Tea, which for some reason tasted better than usual - it was really fragrant and delicious.

Having also seen combinations with citrus and Earl Grey tea which really worked, I decided to experiment with the Jasmine Tea + Rangpur combination.   Luckily, I also had some really good quality tea in my pantry that I had brought back from a trip to Vietnam.  The tea is from the Sofitel Metropole Legend Hanoi, which is a really cool hotel, housed in an old colonial French building. 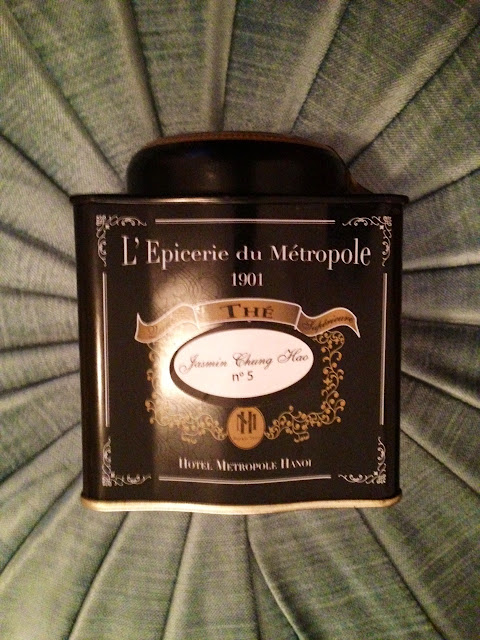 The marmalade making also coincided with a bake sale at work to raise money for a charity.  My boss had the idea that instead of baking cake, I could bring in some jars of the preserves I'd been making.  And given the harvest of Rangpurs I'd brought back from Canberra, I figured it was a perfect opportunity raise money via marmalade.  However, this just made me a bit worried that the end result wouldn't be any good - instead of selling Rangpurs, I'd just be selling lemons. 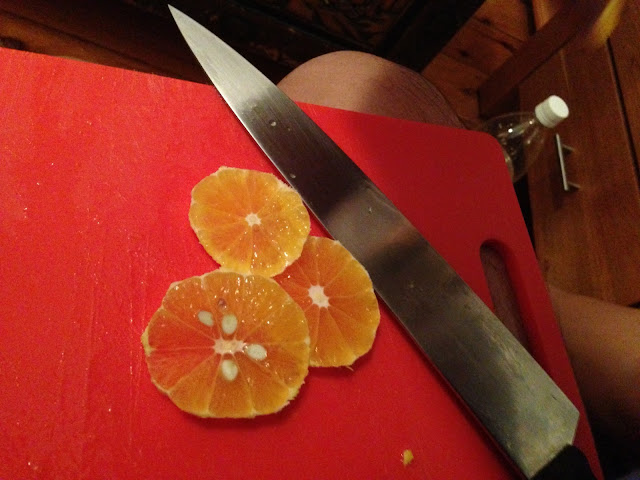 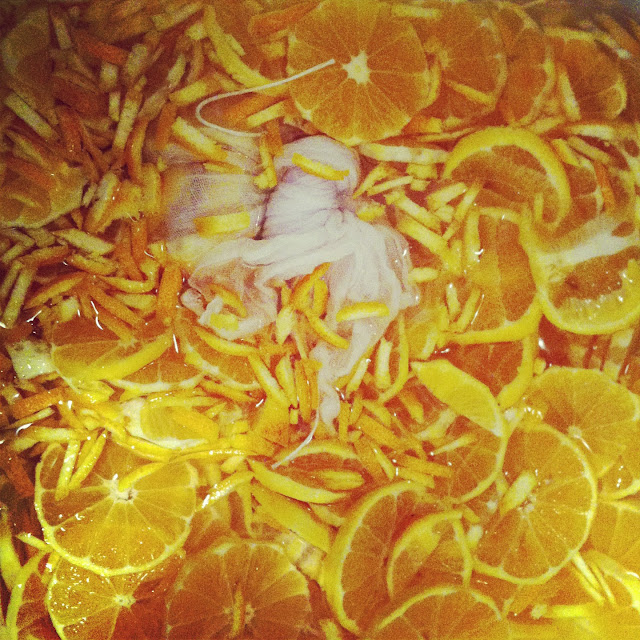 When compared with the Kumquat marmalade I made a couple of weeks ago, I think this marmalade recipe has room for improvement.  Rangpurs are quite tart and they give the marmalade a bitter aftertaste.  I'm also not sure the tea really added much to the end result, other than a slight floral note.  But I'm really not the best judge of marmalade, especially given that I only rarely eat it.  When I do, I tend to enjoy it, but I'm not a marmalade fanatic like some people I know. 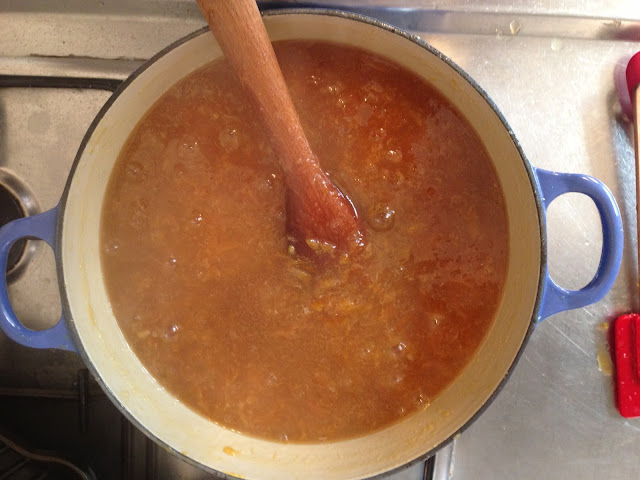 The marmalade-lovers who tried my recipe all seemed to give it a thumbs up (however, these "marmalade-lovers" also happened to be some of my friends, so maybe they were holding back their harsh, career-ending comments - that's what friends are meant to do... right?).  One criticism I received was that it was slightly crystalised and not globbular enough.  Originally when I made the jam, I used the cold saucer test to work out whether it was ready and I thought it had reached the setting point.  I was totally wrong.  The marmalade didn't set on the first attempt and it was still quite wobbly and runny in the jars.  The next day I had to scrape the marmalade out of each of the jars and then wash and sterilise them all again (took ages because I'd made so much) and then reduce it in a pan for an additional five or ten minutes. This probably resulted in the crystallisation.  It's also a pretty fruit heavy and chunky jam, which adds to the thicker texture. 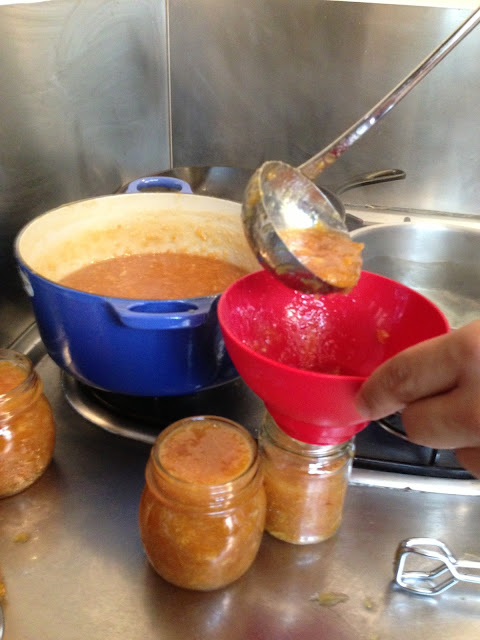 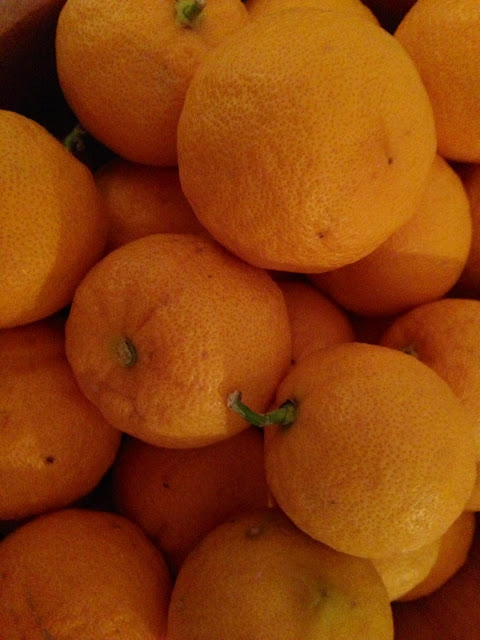 1.  The first step is the most time consuming and finicky.  Peel the zest off the fruit in strips.  Once you have peeled all of the fruit, stack the zest strips and slice finely with a sharp knife (see photos above).

2.  Next, slice the remaining fruit into thin circles (see below).  As you go, pick the seeds out of the pulp and put them aside. 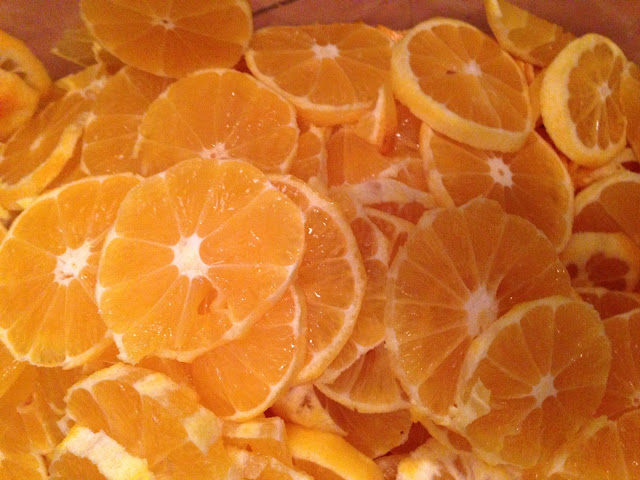 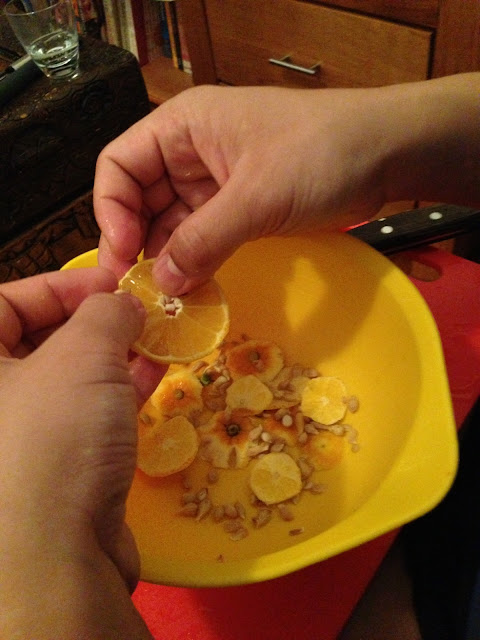 3.  Put all the seeds that you removed into a muslin cloth bag and tie tightly with twine.


4.  Place the sliced zest, the fruit circles and the seed bag into a large container and cover with the 10 cups of water.  Leave this overnight to soak. 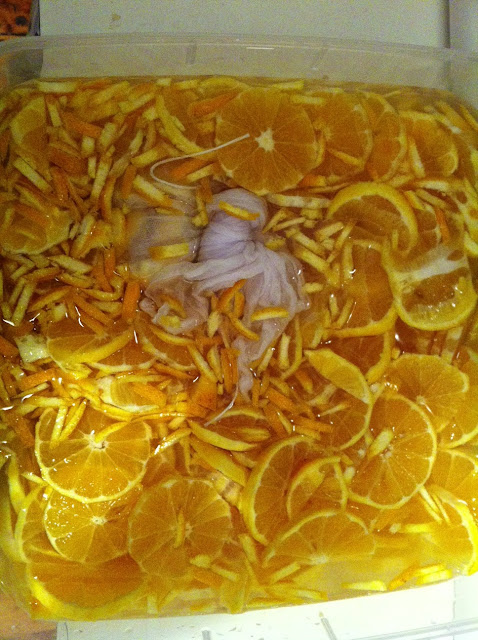 5.  The next day, transfer the zest, fruit, seed bag and the liquid into a pot.  Bring the pot to the boil and then gently simmer the fruit and water for around 20 minutes.  Then allow the mixture to cool, transfer it back into the container and then leave it to soak overnight again.

6.  On the third and final day, warm the sugar on a baking tray in an oven, preheated to 110 degrees celsius, for 15 minutes.

7.  All of the white pith should have now disintegrated after the soaking, but put some gloves on and then use your hands to break up any remaining pith.

8.  Put the Jasmine Tea into square of muslin cloth and tie it up tightly (if you're not using tea bags).

9.  Pour the fruit and liquid into a pot, along with the tea and the seed bag, and bring to the boil. 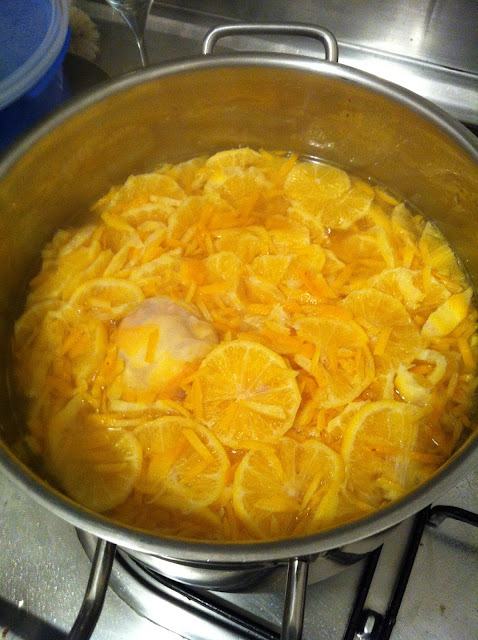 10.  Once it has reached the boil, add the sugar into the pot.  Skim off any white froth that bubbles up to the top.

11.  Reduce the mixture on a high heat (preferably around 104 degrees celsius if you have a thermometer) until the marmalade gets to a "jam-like consistency".

12.  You can test the consistency using the cold-saucer test. 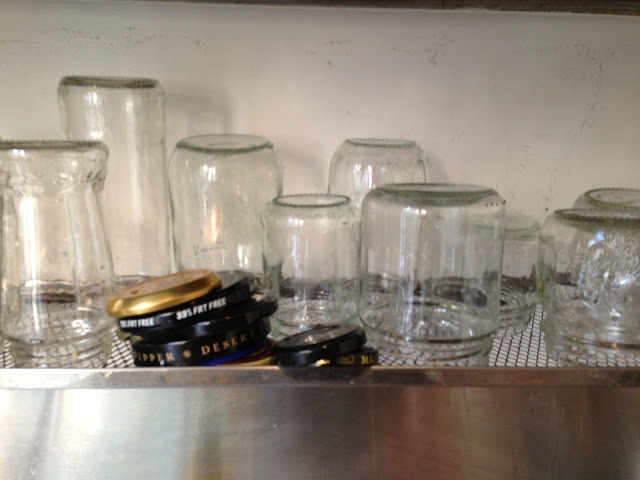 13.  When it's ready, turn off the heat, allow the marmalade to cool for a few minutes and then pour it into sterilised jars.   If using preserving jars, you can seal the jars by canning them in a water bath for ten minutes. 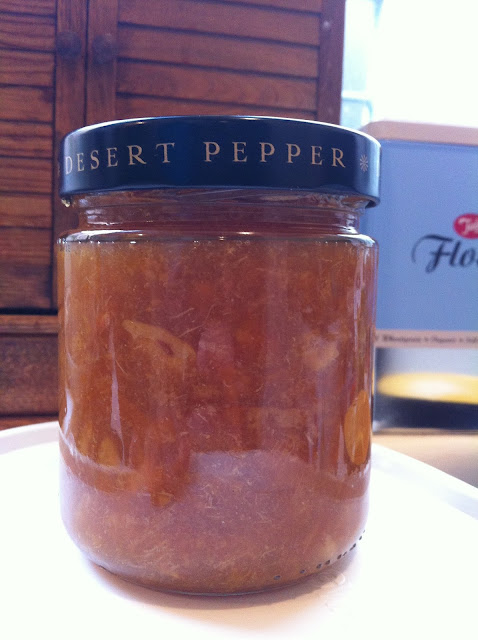