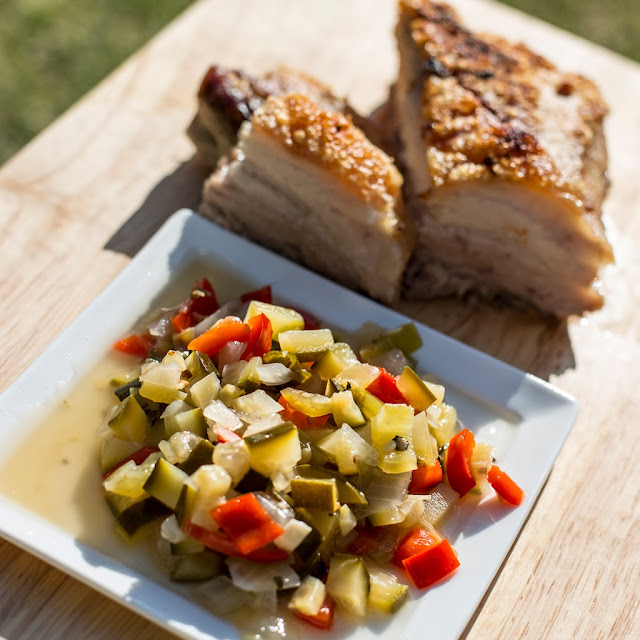 So 20 posts into this blog, and after making several different types of pickles, a jam, a sauce and a few marmalades, I was ready for something different - a relish.

I can remember a few years back when I was travelling around Canada, I was in Vancouver in the middle of winter.  After a bit of sight-seeing and walking around, I was pretty hungry.   I came across a guy who had set up a barbeque on a street corner and was grilling some kranskys for hot dogs.  You could pair your kransky with a range of  pickles and relishes, displayed in a line of jars.  After a several hours of deliberation, I decided to go with the cucumber relish. The relish really complimented the hot dog and even all these years later, I wanted to recreate the delicious relish to have on sandwiches, hot dogs and to serve with meat. 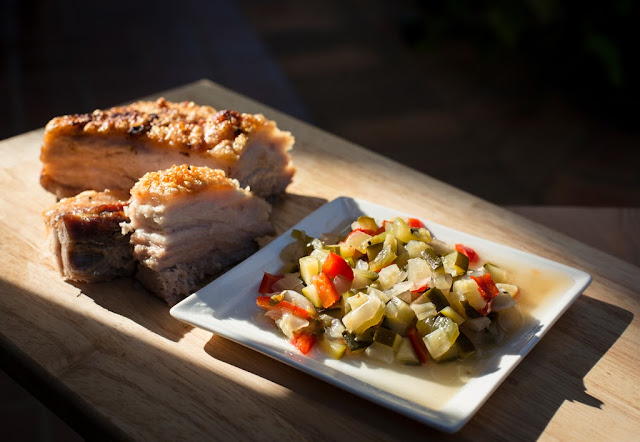 A relish is pretty much a condiment featuring finely chopped vegetables, preserved in vinegar and sugar, flavoured with herbs and spices.  I used Kevin West's Saving the Season as a reference book to inspire my recipe, and he says that "relish occupies a niche somewhere between condiment and side dish" - so it's quite versatile.

I also wanted to make something from scratch, and invent my own recipe, rather than adapting recipes as I've done previously. Reading through West's relish recipes (try saying that 3 times, quickly!) and some others on the internet, I could see the type of low acid vegetables that are required in relishes, and could see which vegetables are used often and clearly work well, like onions, zucchini and cucumber. 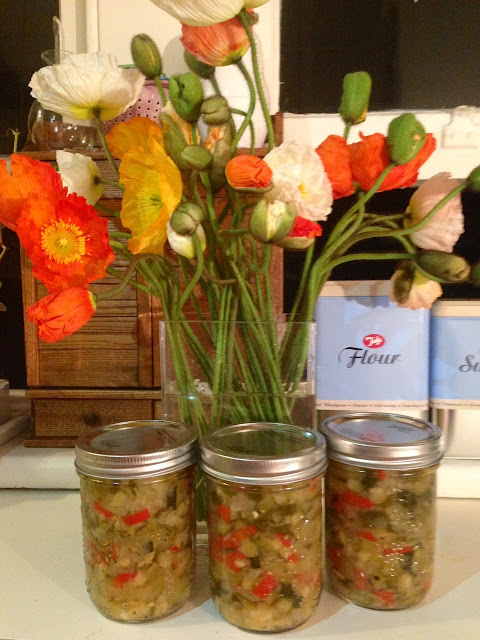 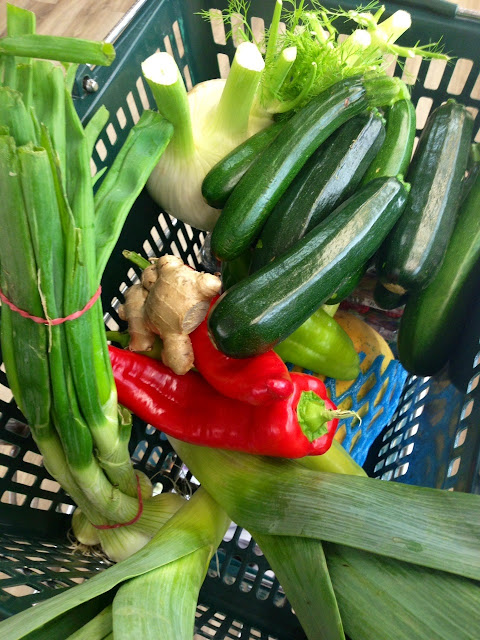 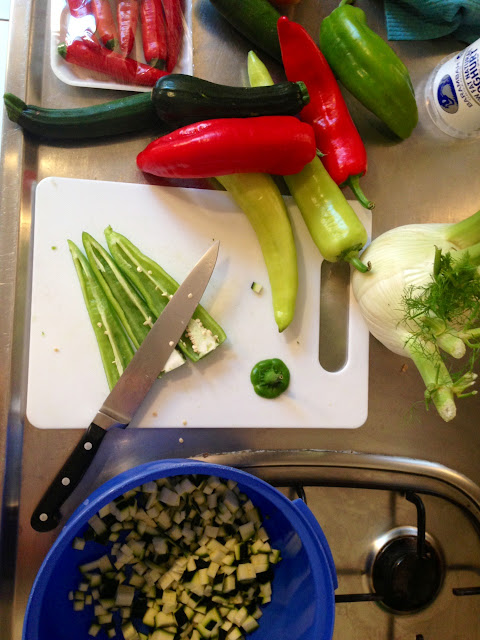 I calculated the dilution level for the vinegar, and decided to include sugar to taste.  I added more sugar than in West's recipes, but he says in his book that he prefers his relishes to be less sweet (and I have a bit of a sweet tooth).

The first step in the recipe is to salt the vegetables.  I ground up some rock salt in a spice grinder and then coated the vegetables.  When I left my last job, my team bought me a spice grinder as a farewell present - it really saves compared with a pestle and mortar.  Tasting the end result I thought I might have over-seasoned the relish, but after trying it with some food, I think it balances out nicely.

The relish is perfect with meat, like a simple roast pork.  The fennel in particular adds a really nice aniseed flavour to cut through fatty meat. Over the weekend, I had my family's Father's Day lunch.  As with all family functions, my mum had completely over-catered and conveniently cooked some roast pork for me!  My cousin Bettina who took some photos for my recipes on Yahoo! 7 Food (caramel apple jam and zucchini pickles) was kind enough to take some shots of the relish for me. 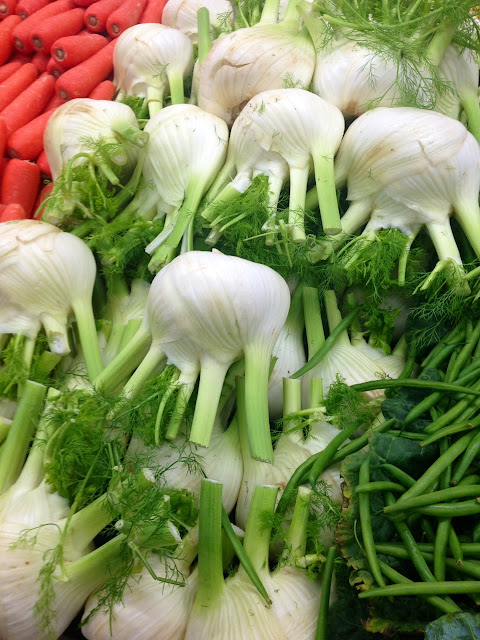 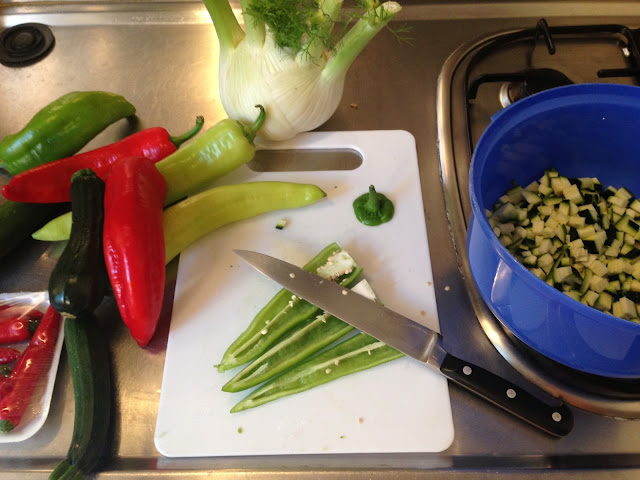 You'll also see in the recipe below that I had planned to include leeks into the relish.  But after being swept up in a busy weekend, I totally forgot to add them into this first batch!  That being said the relish still tasted fantastic.

Update:  The good folks at  Yahoo! 7 Food just published this relish concoction! Check it out! 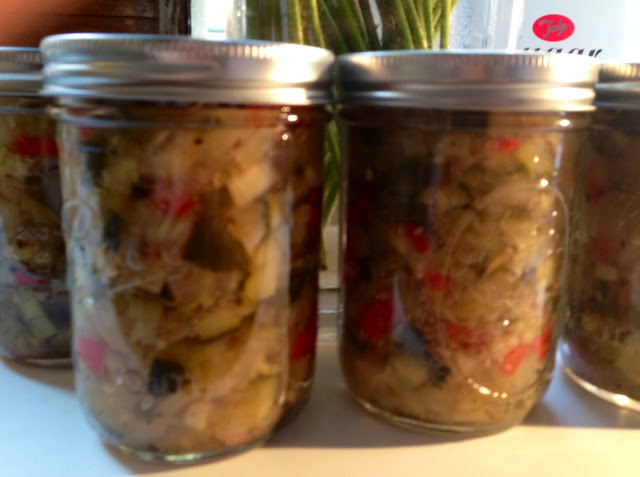