So I was recently faced with two horrible pickling setbacks.

Firstly, I ran out of kimchi.  Despite my girlfriend rejoicing at the lack of fermented cabbage stinking out our fridge, I was devastated.  I had received quite a few requests for samples and this depleted my supplies.

Secondly, I made some bad cocktails (#cocktailFAIL).  I'd come across a cool recipe online for preserved lemon Martinis, which I tested out using the batch I'd made a few months ago.  The only problem was that in my first batch of preserved lemons I'd sealed the top of the jar with some olive oil.  The thing to note here is that oil is not a key ingredient of a Martini - I've never had a beverage that could be described as 'greasy' until that Martini experiment.  So in light of these two setbacks, I decided to reattempt both of these preserves. 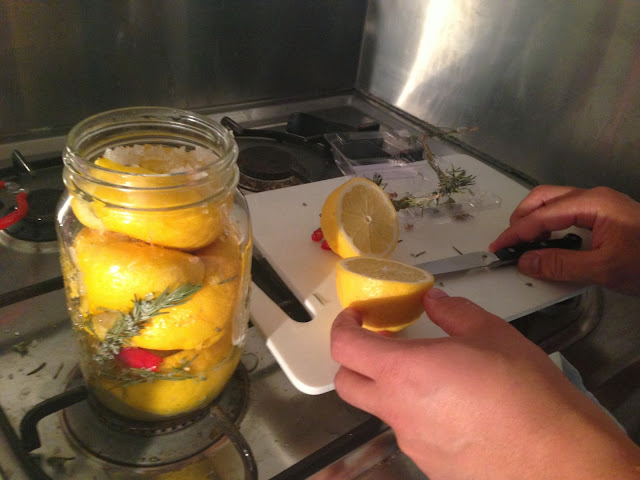 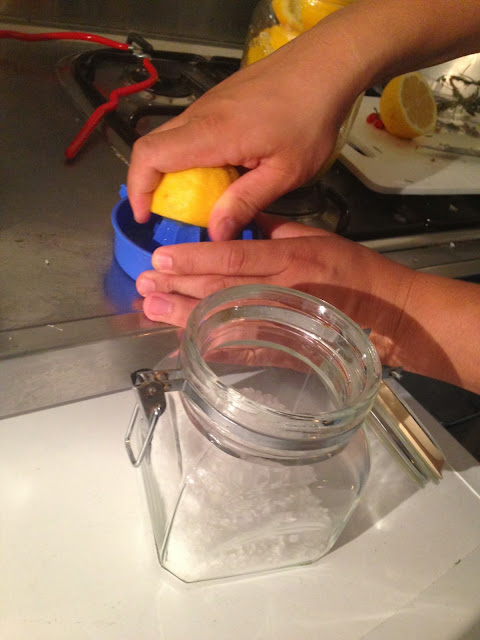 When I made preserved lemons earlier this year, I was pleased with the results, but I had a feeling they could taste better with one key variation to the method.

A few weeks ago, I had lunch at my folks' place.  It was a beautiful sunny day so we had lunch under the verandah outside.  While gorging myself on my mum's delicious roast pork with the Father's Day Relish I had made that weekend, I noticed that the citrus trees all over the backyard were abundant with fruit.  I picked lots of kumquats, but also got a decent stash of lemons.

So I decided to remake some preserved lemons, this time improvising with my own recipe.  Previously I followed a recipe on the SBS website, which called for submerging the lemons in boiling water.  While most of the recipes I saw in my research called for immersing the lemons in lemon juice, I didn't have enough lemons to do this, so I went with the alternative boiling water method.  The extra lemon juice obviously enhances the preservation of the lemons, because of the higher level of acid, and also leads to a more intense lemony flavour.

I haven't yet tried to use my new extra-lemony batch in my cooking but I'll keep you all posted on how they turn out.  I'll also write a post about the preserved lemon Martinis when I get a chance to make them. 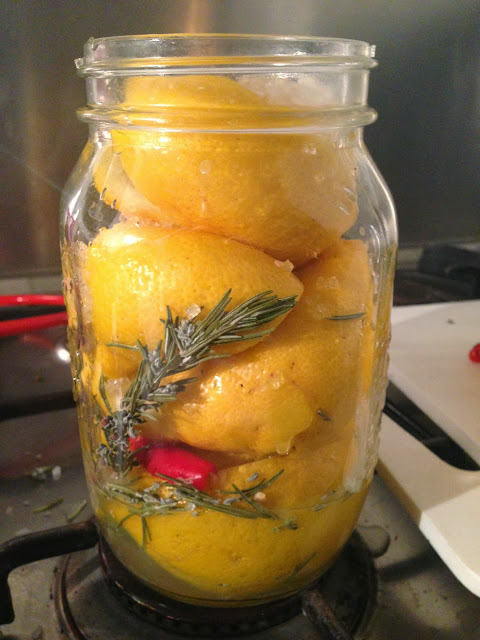 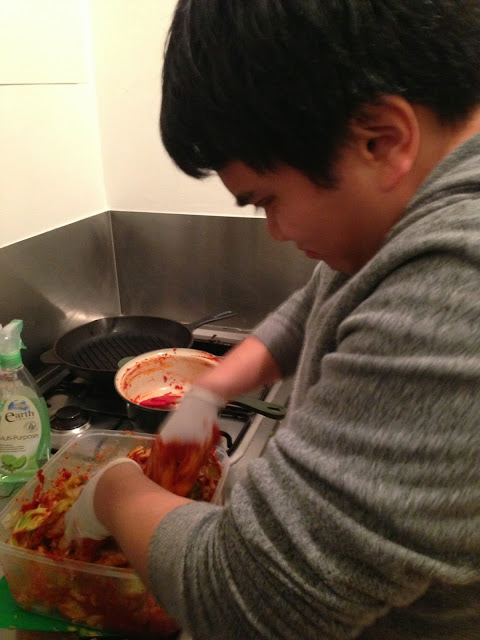 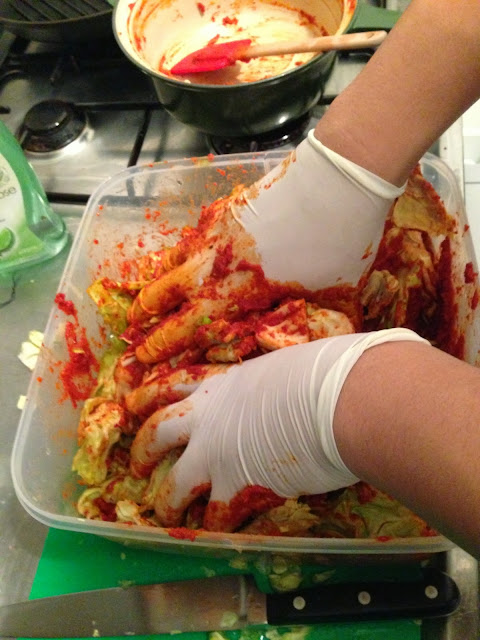 This Korean preserve is meant to be pretty funky and not in the Saturday Night Fever sense of the word  - fermented cabbage has a really pungent smell.  For my first attempt at kimchi I used a recipe by David Chang from an issue of the Lucky Peach magazine.  He recommended leaving the kimchi for a week before using it, and added in a lot of fish sauce and Korean salted brine shrimp, all leading to maximum funkiness.  While this might not be some people's cup of tea, I thought the pungent and intense taste was still pretty delicious.  I had also made a fair bit of kimchi in this first batch and set aside a huge jar for myself, so I didn't quite get to go through it before it started getting mouldy.

This time, I turned to another Asian American chef, Edward Lee, and a recipe in his excellent book Smoke and Pickles.  A key difference between Chang and Lee's recipe is that Lee adds daikon into the mix.  I'd been using daikon radish quite a lot in my preserves over winter, so it was easy for me to add this into the kimchi too.

Lee soaks the cabbage for only 2 hours in a salt brine, while Chang soaks his overnight (that being said, Chang's brine uses much less salt than Lee's). Whether or not this actually makes the cabbage less salty or draws out less water than if the cabbage was left overnight is questionable.

Another key difference between the Kim Chi recipes is that Lee makes a paste using water, rice flour and sugar to make the sauce thicker (see picture below).  He approaches his Kim Chi recipes in a three phase process - the Cabbage, the Paste and the Guts.  Finally, Lee pairs back on some of the fishy ingredients, making it slightly less intense. 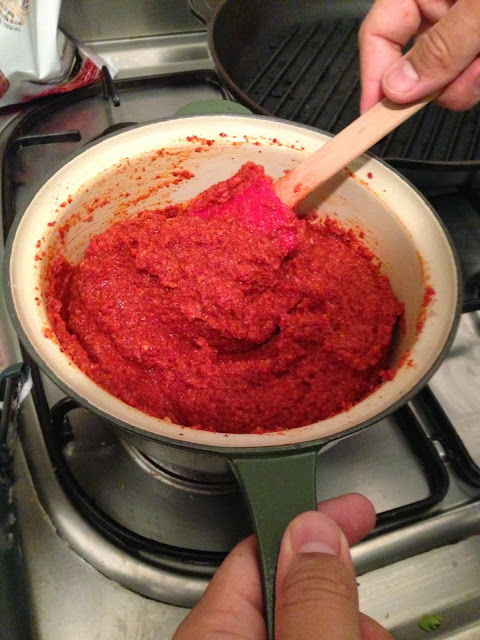 After trying both, I think I prefer Lee's recipe.  It's a bit more balanced and a better accompaniment to food than Chang's, which can overpower the flavour of the food  you're having it with (but it's still pretty good on its own).

I adapted Lee's Kim Chi recipe so it would be easier to make in my tiny kitchen. I blitzed some of the ingredients together in a food processor instead of pre-grating or crushing them.  I also decided to use savoy cabbage instead of chinese cabbage as an experiment - seemed to me that the thicker savoy cabbage might hold the crunch better than chinese cabbage, and after tasting the end result, I think I was right.    I also included a heaped tablespoon of brine shrimp, which isn't called for in Lee's recipe, but which added some depth of flavour and an enhanced umami taste.

Note:  Beware of exploding kimchi jars.  I left mine out on my kitchen bench overnight and in the morning I returned to this carnage - kimchi juice everywhere! 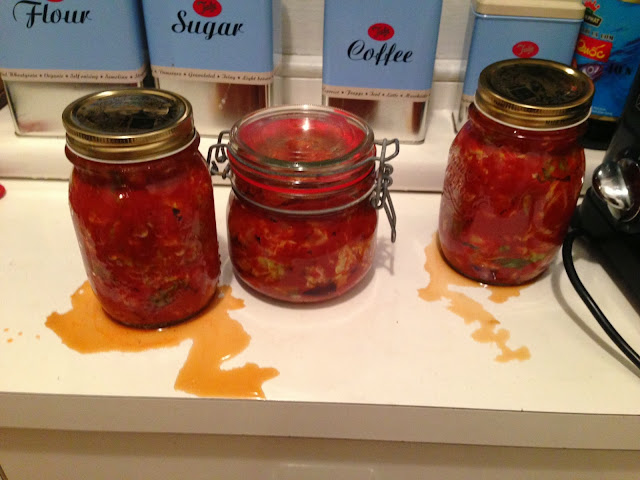 What you need:
The preserving: