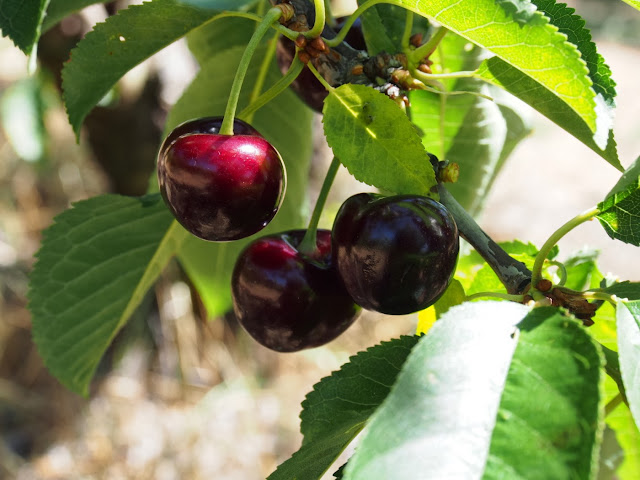 Earlier this month I went on a road trip to a cherry farm near Young.  Young is a town in the ‘South West Slopes’ region of NSW (according to Google) that’s known for its cherries, so much so that every year they have a cherry festival. My girlfriend’s folks drive there every year to pick their own fresh cherries.  Their favourite farm is in a town just outside of Young called Wombat (yes, there is a statue of a wombat next to the town’s pub) and goes by the name of Wombat Heights.  So when they mentioned that they would be going again this Summer, I thought it would be a good idea to tag along and bring back a haul for myself. 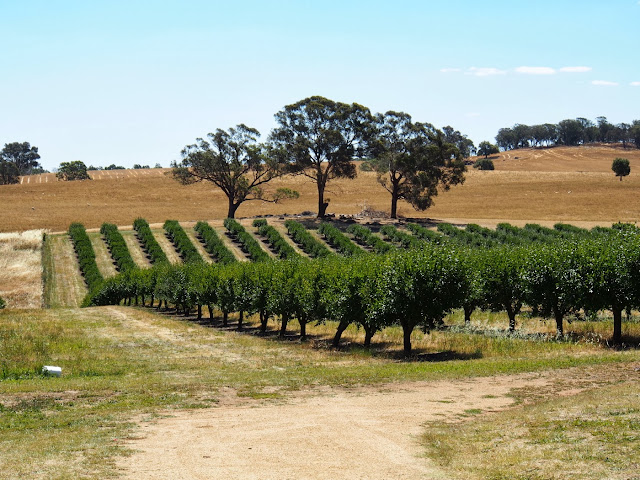 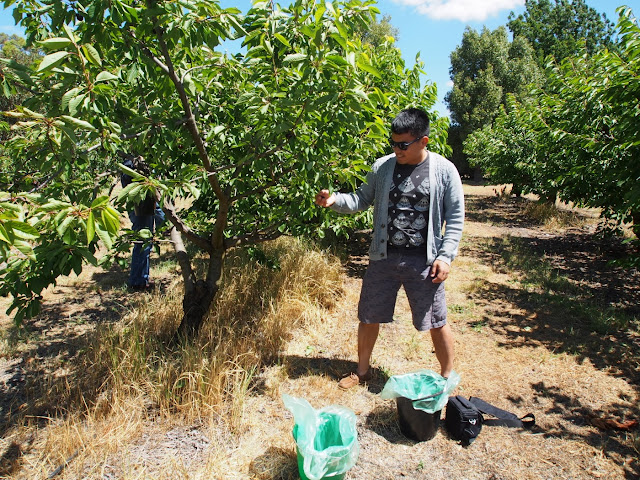 Wombat Heights is about a 4 hour drive from Sydney.  You pretty much drive towards Canberra, but then keep going past Yass and then turn right, and keep going a bit further.

Once you get to the farm, the process is pretty simple to get picking – head past the ‘Grog Shed’ and the farmer will give you a large bucket and then send you off in the direction of the chosen cherry orchard.  Wombat Heights grows several varieties of cherries and other fruit in their orchards, so the cherry variety that you pick depends on day you go and what is ripe at that time in the season.  Some of the trees we meandered past had already been stripped bare by professional pickers (read backpackers) for commercial sale. 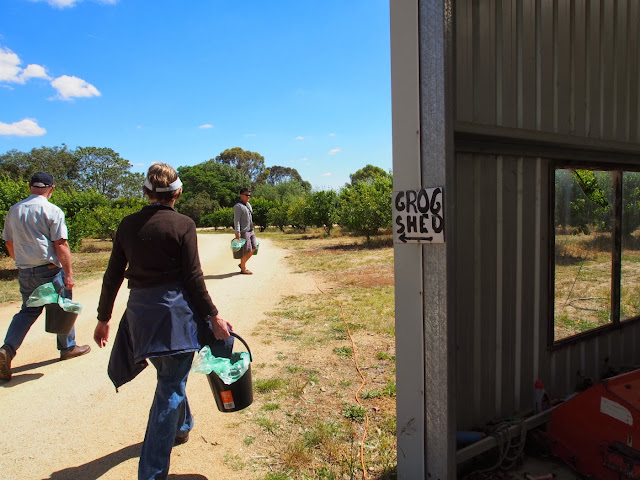 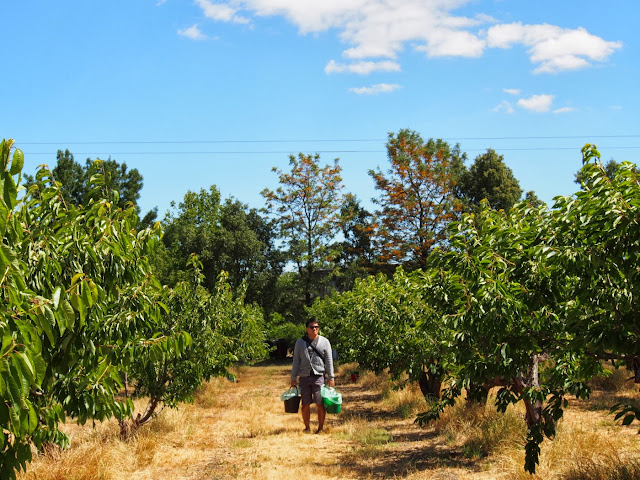 The cherries we picked were a variety called ‘Ron’ (imaginative name – I assume some guy called Ron created/discovered them).  They have a dark red colour and an intense cherry flavour, and they were unbelievably and addictively sweet.  Cherries were $7 per kilo, which is about half the price you get at fresh food markets.  However, given we took a day off work, hired a car, paid the petrol, did the picking and had to stay in Canberra with my girlfriend's parents for the night, I’m not sure you could claim that it is an economically effective method of cherry procurement... 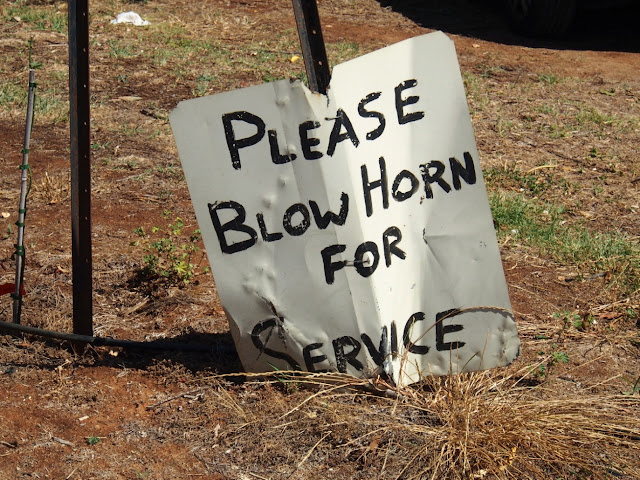 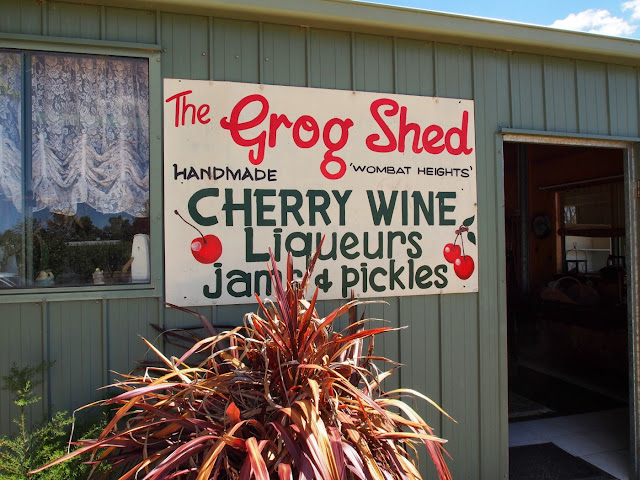 The process of making cherry jam is tedious, mainly because you need to remove thousands (OK, hundreds) of pips.  To do this, you need to get hold of a cherry pipper.  This contraption cuts out the pip but keeps the rest of the cherry intact.  It’s a pretty messy process and I managed to cover the kitchen in bright red cherry juice - my girlfriend cleaned the kitchen the following week and discovered the remnants still on the ceiling. 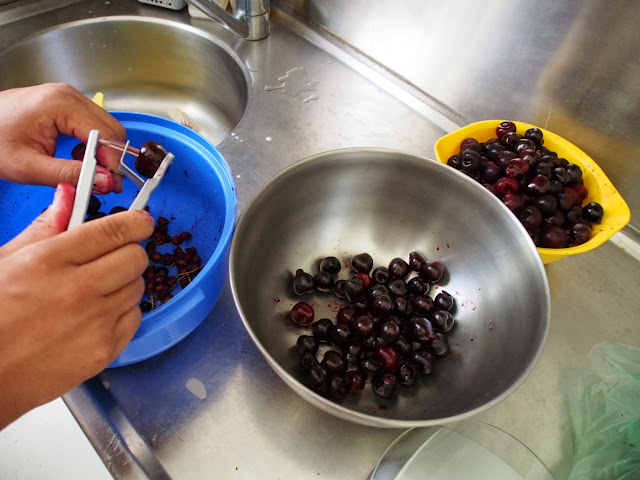 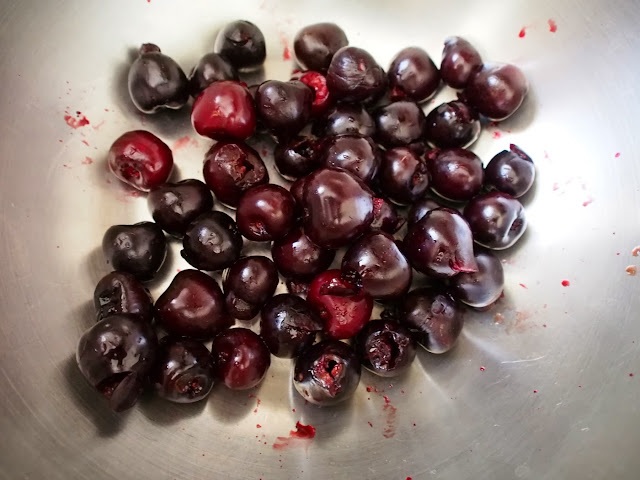 The end product is a really delicious jam with a distinct, rich flavour.  Rather than chopping the cherries up, I kept mine whole, which means you get some good chunks of fruit throughout the jam, but they still soften and absorb the sugar.  The addition of lemon juice balances the sweetness of the cherries and conveniently adds pectin (a thickening agent) to the mixture.

The recipe below came from my girlfriend’s dad, who makes it every year.  It’s unbelievably easy (once you've removed the pips).  Just add in sugar to two thirds of the total weight of the cherries plus the lemon juice.

Apologies to all the Jarhead readers out there – it’s been ages since I last posted.  I was in the Philippines throughout November, eating my weight in pork (checkout my Instagram to check out some pics of this ridiculous pork consumption).  Then December just flew by! But I’m back now, and I’ve got some great recipes to share in the next few weeks.